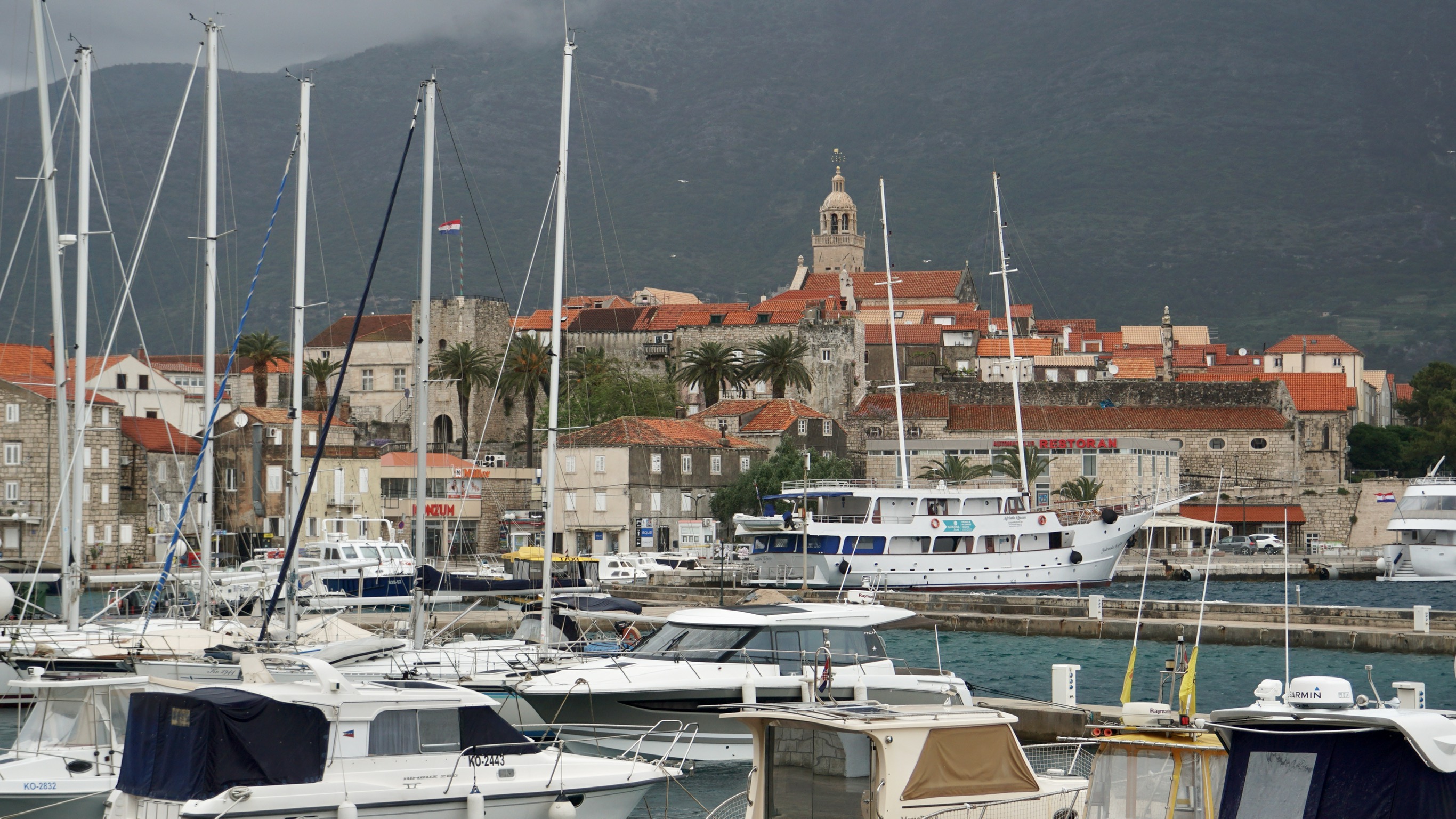 We drove three hours today to the little village of Ston to catch a ferry to the small island of Korčula. It is the supposed birthplace of Marco Polo, the famous explorer and writer. My friend Andy’s grandmother and great-grandfather were both born and lived here which makes this place even more special.

I snagged this internet photo of this ancient, medieval walled city to show how charming it is, which doesn’t show off it’s beauty because today, it’s raining cats and dogs.

Captured and ruled by Venice four times, the last reign lasting for 370 years, there are a lot of influences of Venice reflected in many of its buildings. Korčula was a favorite port for the Venetians, with their major contributions being their stone carving, and ship building skills.

You can always tell the symbols of Venice by the lions. They always have wings, an open book, and waves of water under the feet of the lion. The open book was a symbol of peacetime.

Building outside of the gate was forbidden until 1863. That’s when the wooden drawbridge was replaced with the stone stairsteps, which opened they way for construction outside the walls. The narrow streets were straight on one side to take advantage of the cool breezes off the sea, which would air condition the city, while the curved streets on the other side would block the harsh winter winds. Looking down on the city from above, the shape of the streets formed a fishbone shape, which gave the city its nickname of the Fishbone City.

Located in the heart of this tiny city is the cherished jewel in the crown of Korčula, St. Mark’s Cathedral. The carvings on the entrance door will stop you in your tracks. They are breathtakingly beautiful and intricate, telling a powerful story.

Lions flank both sides, fierce and powerful, protecting the church from any evil. Adam and Eve, are below, squatting in a rather awkward position, looking none to comfortable, show that they must be born anew, like a newborn baby, in order to enter the church. The intricate patterns and detailing were just exquisite. These people were indeed master stone carvers.

Korčula island only has a population of 2800 people. Our tour guide tells stories of growing up in this small place, surrounded by water, and going to school in these ancient historical buildings, where everyone has their own small garden, and grows their own food. The person with lemons and oranges makes marmalade, and trades their jam with the person who bakes bread, or the one that grows vegetables. For her, the island has everything one needs. Can you imagine?

It’s a lovely place for boating activities, swimming in clear waters, and sitting in the sun…but not today…we’ve gotta dry off and warm up!!