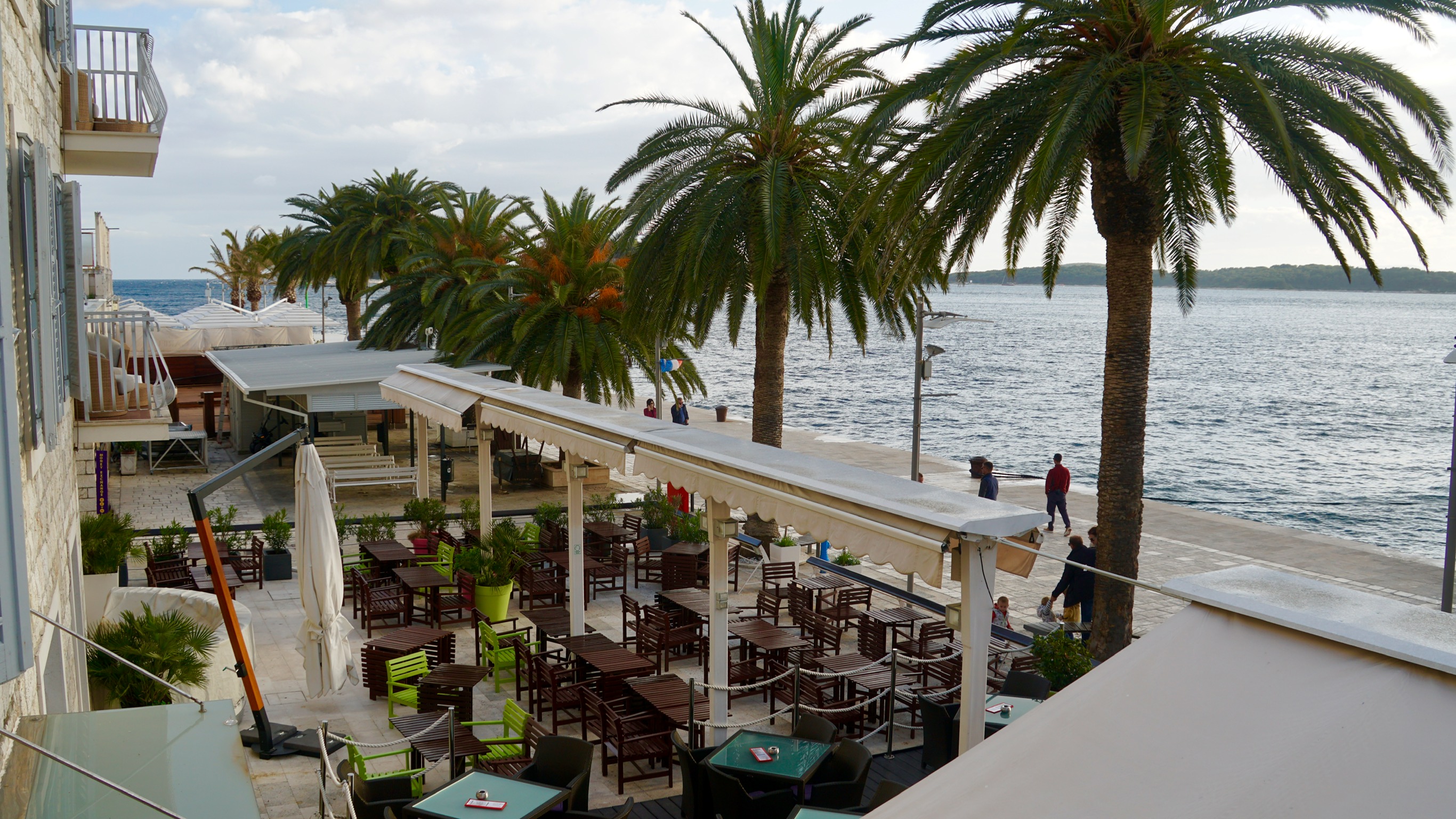 It took us all day to travel to our next destination…the little island of Hvar. Driving by bus to a ferry, crossing the waters of the Adriatic Sea, and then taking another bus across the entire island was a long but picturesque, scenic process. The color of the Adriatic Sea is so beautiful…sometimes blue, sometimes turquoise, sometimes green. Looking out across these waters is so peaceful though…no photoshop…that really is the color of these tranquil waters.

Along the way, we made a short stop at a border crossing for a passport check. Everyone jumped out of the bus to take photos because who knows when we will ever be in Bosnia-Herzegovina again. At least we can say we were there for half an hour for a soda and a pastry. It’s hard to think about the bombing and shelling that was happening in 1995…it’s such a beautiful place.

Driving along the winding roads across the 40 mile length of the entire island seeing nothing but a rocky wilderness, you start to wonder where the heck the people live on this island. We did, however, pass a lot of rock terraces of grape vines for wine, olive trees for olive oil, and tangerine trees which are three of the islands main products.

When we finally reach our destination, it’s oh so charming. Limestone walled buildings topped with orange tiled roofs line a horseshoe-shaped bay filled with boats and yachts of all sizes, shapes and prices. Palm trees hug the shorelines on wide sidewalks which are covered with retractable awnings, shading hundreds of people drinking and chatting, watching the world go by. No wonder Condé Nast Magazine put Hvar on their list of top ten islands in the world.

This was another favorite port of the Venetians, who ruled here for over 400 years. The ruling elites lived in separate parts from the commoners. It’s easy to distinguish their homes down the small alleyways…they are the ones with the ornate decorations.

It’s a lot of work and cost to restore these beautiful facades. This owner spent the last two years restoring the entire stone wall and all of these windows. Back in the day, they did not have glass, and hung leather coverings over the window openings. Don’t you just love these windows?!

Who wouldn’t want to live in this one!? Wow!

In 1612, Hvar opened the first public theatre which welcomed all citizens, regardless of public status. Up until this point, it was unheard of to have the social classes mix. It has been in closed for the last two decades for renovation…t’s due to reopen in the next two weeks. Too bad we have to miss seeing this freshened up after twenty years.

This island of 11,000 people, like other islands in Croatia, was without enough water for its residents until 1986, when they finally piped water from the mainland under the sea to the island. Until that time, in the summer, water was rationed during certain hours of the day. In the past, they dealt this this problem with public cisterns like this, which collected water for all the citizens of Hvar. The lion has lost his face, but you can tell from the closed book that this cistern was constructed during the time of war.

What a charming little resort. It reminds me a lot of Portofino, but without the colorfully painted buildings. So grab a glass of wine and a pizza, make yourself at home and soak in the sun. Make sure and check out Rossco’s Pizzeria by the church. It’s one of the best pizzas we’ve had in a long time. Sorry it’s only half a pizza pic, but the guys swooped in and ate it before I got a good shot of it…

3 thoughts on “Top Ten – The island of Hvar, Croatia”