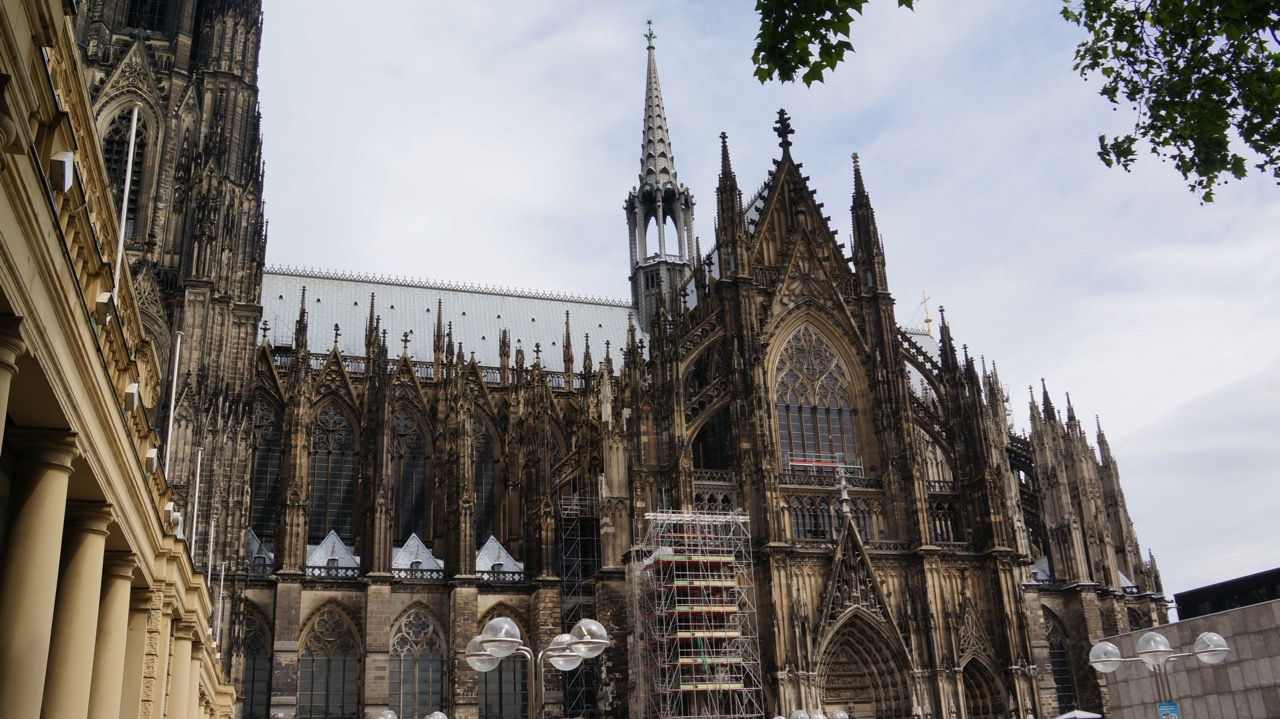 Cologne has a special place in my heart because my Uncle Dieter is from this city.  I was very anxious to explore and discover this town.  It was established by the Romans in the first century AD, then occupied by the French and the British over time.  It was one of the most heavily bombed cities in Germany during World War II, the Royal Air Force (RAF) dropping 39,000 tons of bombs on the city.  The bombing reduced the population by 95%, mainly due to evacuation, and destroyed 90% the entire city. With the intention of restoring as many historic buildings as possible, the rebuilding has resulted in a very mixed and unique cityscape.

After the war, the British, who were in charge of the rebuilding of the city, hired a German architect to rebuild old town, as cheaply and efficiently as possible, with simple concrete facades. He wouldn’t do that, and the engineer was jailed for his disobedience.  Thankfully, Köln has a beautifully rebuilt frontage along the waterfront.

On the backside, one can see much simpler facades which were rebuilt after the war.

The most visited attraction in  Germany is the Cologne cathedral, a monument to German Catholicism and Gothic architecture.  With its tall spikes, it was the tallest building in the world, only be be surpassed at the time, by the Washington Monument.  The church started construction in 1248, but work was halted after 300 years. It resumed again in the 19th century, and was completed to its original plans.  It has the largest facade of an church in the world. 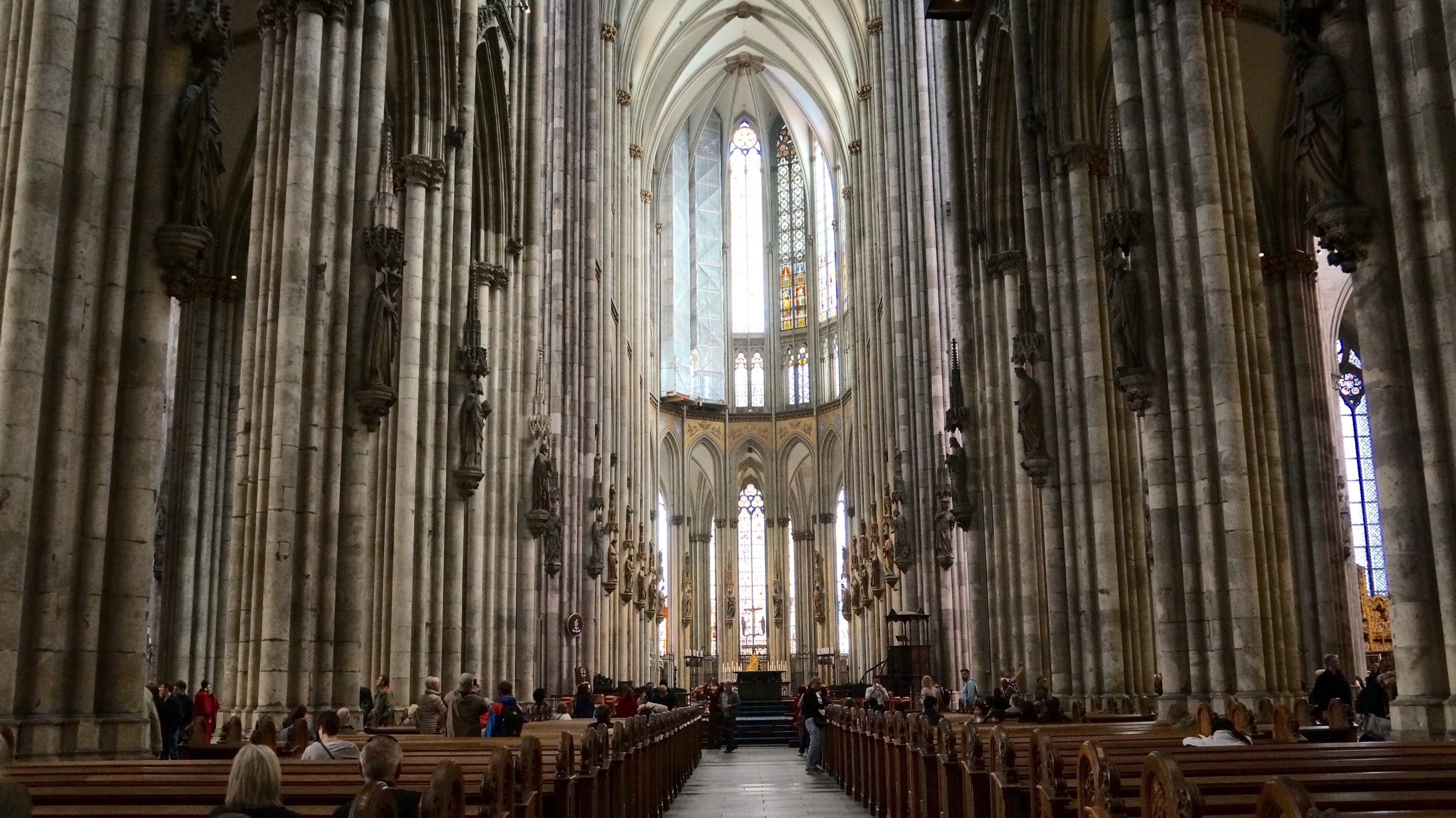 After WWII, there was very little money for beautification when it came to rebuilding. A decision was made to replace windows by letting a computer plan the colors in simple blocks to replace the stained glass windows. Here is an example of a window that was saved and a new replacement window.  I don’t think I would want a computer to paint my house colors!   And yes, that is a real window From the church on the right.

In the afternoon, we took a trip to the Lindt German chocolate factory.  Just the name Lindt conjures up familiar sensations melt-in-your -mouth chocolate smoothly coating your palate. This factory was a fun place to see how these wonderful delights are made, wrapped, and sold to every part of the world, and who could resist the mouth-watering samples of liquid milk chocolate coating crisp wafers as you stepped into the factory.

We could not leave Cologne without stopping into a German Brauhaus (brewery) since my uncle says Köln has the best beer on the planet.  We found a great place on yelp and had some fabulous wienerschnitzel with mushroom sauce, bratwurst with sauerkraut and crispy fried potatoes, and, as they do in Cologne, a slender glass of the local, housemade beer. This was a pretty great first day in Germany.  Probst Uncle Dieter from your beloved Köln!! 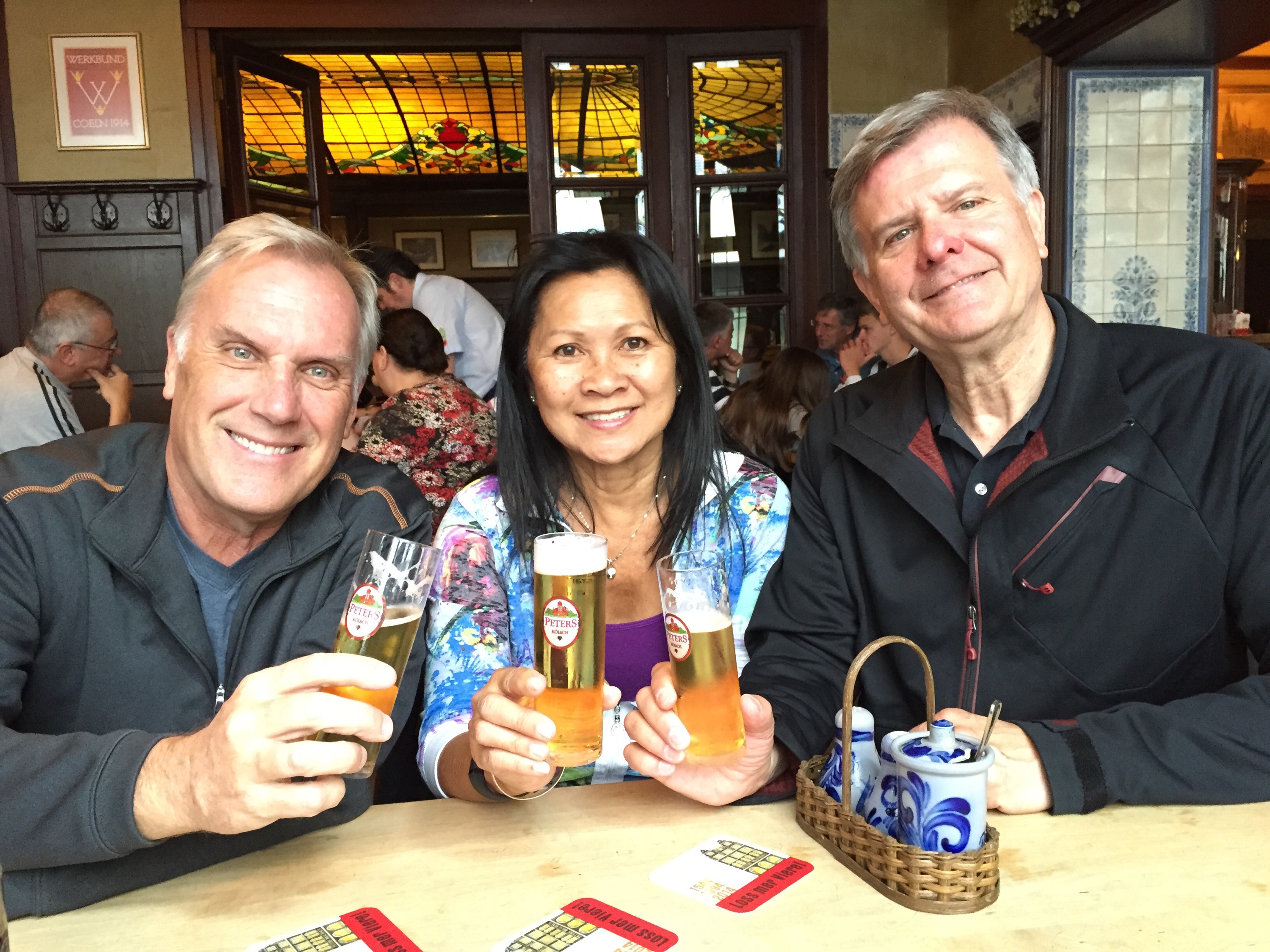