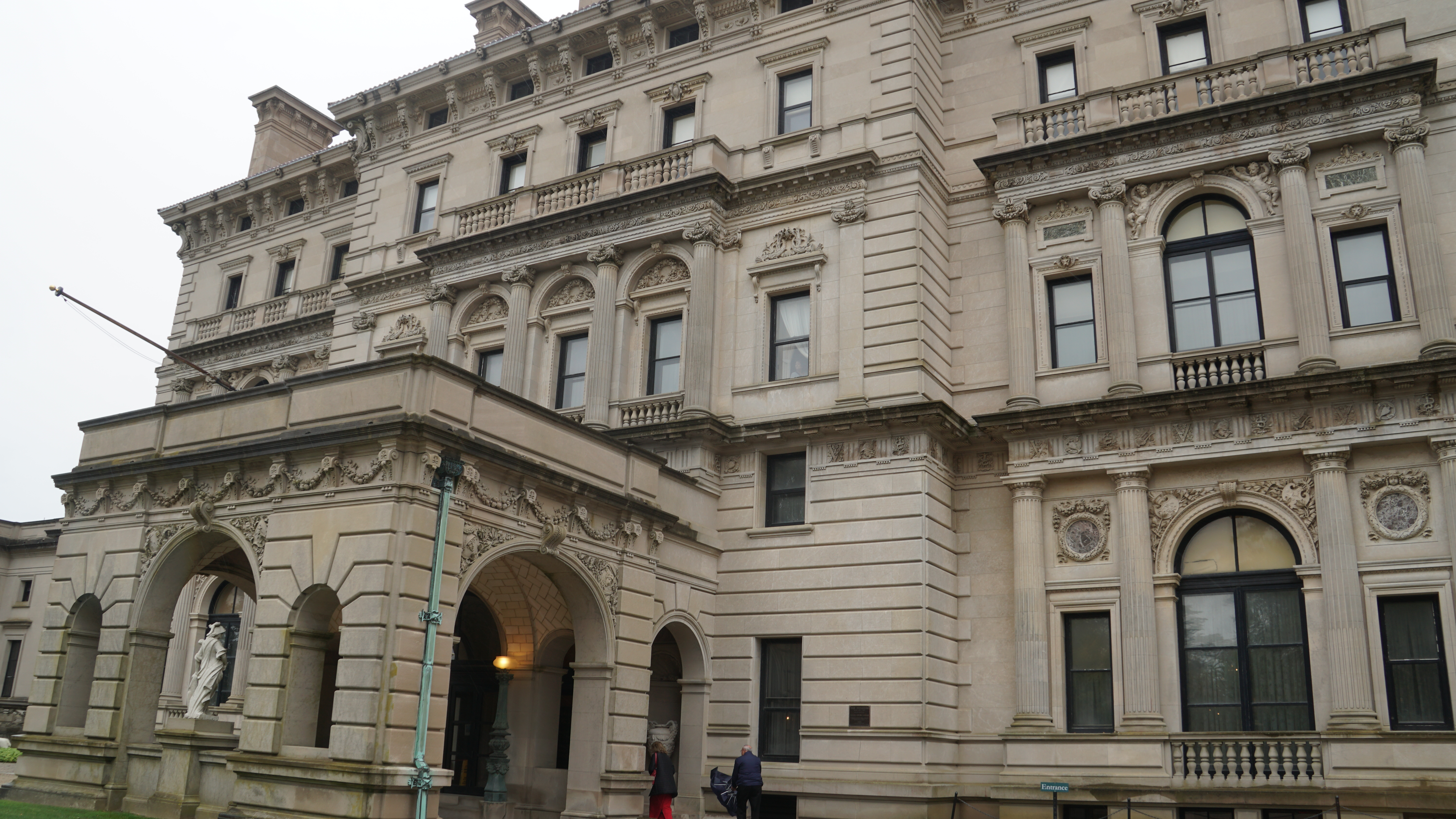 Today we are in Newport, Rhode Island, our very first visit to this state. Our tour guide is so excited because this is her home city and state. As she pointed out where she buys her groceries, the school her children attended, and where she picks up dry cleaning. We weren’t jumping up and down with excitement yet, until we learned a few more things about this place.

Newport is a beautiful seaside city that happens to be the sailing capital of the world. It has been the host for more than fifty years to the most prestigious sport there is, the America’s Cup sailing race. Only the fastest and most technologically advanced yachts from all over the world compete for this lauded trophy.

The history and prestige associated with the America’s Cup race attract not only the top sailors and yacht designers, but also needs the participation of wealthy entrepreneurs and sponsors. Competing for the cup is very expensive, with winning teams spending more than $300 million today. When it began in 1851, understandably, it was a sport for only the extremely wealthy, and we can find those people living here in Newport, giving lavish weekly parties and racing their very expensive yachts.

It was the robber barons of the “Gilded Age,” the late 1800s, who had this immense wealth, a phrase coined by Mark Twain, because “things looked glittery on the outside, but were corrupt underneath.” It was a period right after the civil war, where America was experiencing a boom in growth and expansion. (Remember Scarlett O’hara And the massive building going on after the Civil War was over?) The greedy, corrupt industrialists, bankers and businessmen were gaining extraordinary wealth and opulence at the expense of the working class. They used their power to eliminate smaller competitors, creating monopolies, making them the richest men in the nation. You will recognize their names: Vanderbilt (railroad and shipping), John Astor (Waldorf Astoria), Andrew Carnegie (steel), Rockefeller (steel) , JP Morgan (finance) and more.

They erected these elaborate summerhouses, which they dubbed “cottages,” because they only used these homes for six weeks during the summer season in Newport.

At the height of its splendor, a Newport summer season was a dizzy whirl of grand parties, yacht races and elaborate beach picnics for assorted Vanderbilts, Astors and Morgans, giving these splendid homes the name “The 400 Club.” The name came from the weekly galas held at each other’s homes, which had to include a ballroom big enough to hold 400 people. What a wardrobe you would have to have to keep up with this crowd!

This house below was built for Oliver Belmont, a banker and publisher. His father, for whom the Belmont Stakes is named,(one of the three horse races that comprise the greatest of thoroughbred horse races, the Triple Crown) gave him his love for horses. The house is themed throughout with horses. Then entire first floor was a stable for his beloved horses, the house built above them. It remained that way until he married, and his wife said no to living above a stable!

The crown jewel of the Newport “summer cottage” mansions is the home built for Cornelius Vanderbilt II. It was named “The Breakers,” for the waves that crashed below at the foot of cliffs at the backside of their home. Anyone can now tour this 65,000 square foot beauty as it is now open to the public. It has 70 rooms, 33 which were for the servants, who they called the “staff”. While they were meant to be invisible, but by calling them “the staff,” they felt, it was more dignified.

I love the ceiling of the library, pictured below. There so much amazing detail…

Pictured below, notice the brass call buttons, next to the bed, to call for the servants in Mrs. Vanderbilt’s bedroom.

Completed in just two years, 1895, it’s sad to learn that Cornelius only lived in the house for nine months before dying of stroke at age 55.

The Vanderbuilt’s granddaughter realized that a house like this was difficult and expensive to keep running (over 40 staff members worked to serve the family) and in 1972, she sold the Breakers home and 90% of its furnishings to the Preservation Society of Newport County for $399,000. The organization is non-profit and preserves these historic homes of Newport. Seven of their eleven summer cottages are open to the public. If you get a chance to see these, be prepared to be impressed…it’s Downton Abbey…only the American version, and they are truly a wonder to behold. When are we going to have a mini series on the Vanderbilts?

Imagine only living in these cottages for six weeks a year. In the case of the Vanderbilt’s, their family only owned this house for 79 years. I guess that just shows you that no matter how rich you are, or how much you have, you can’t take it with you.