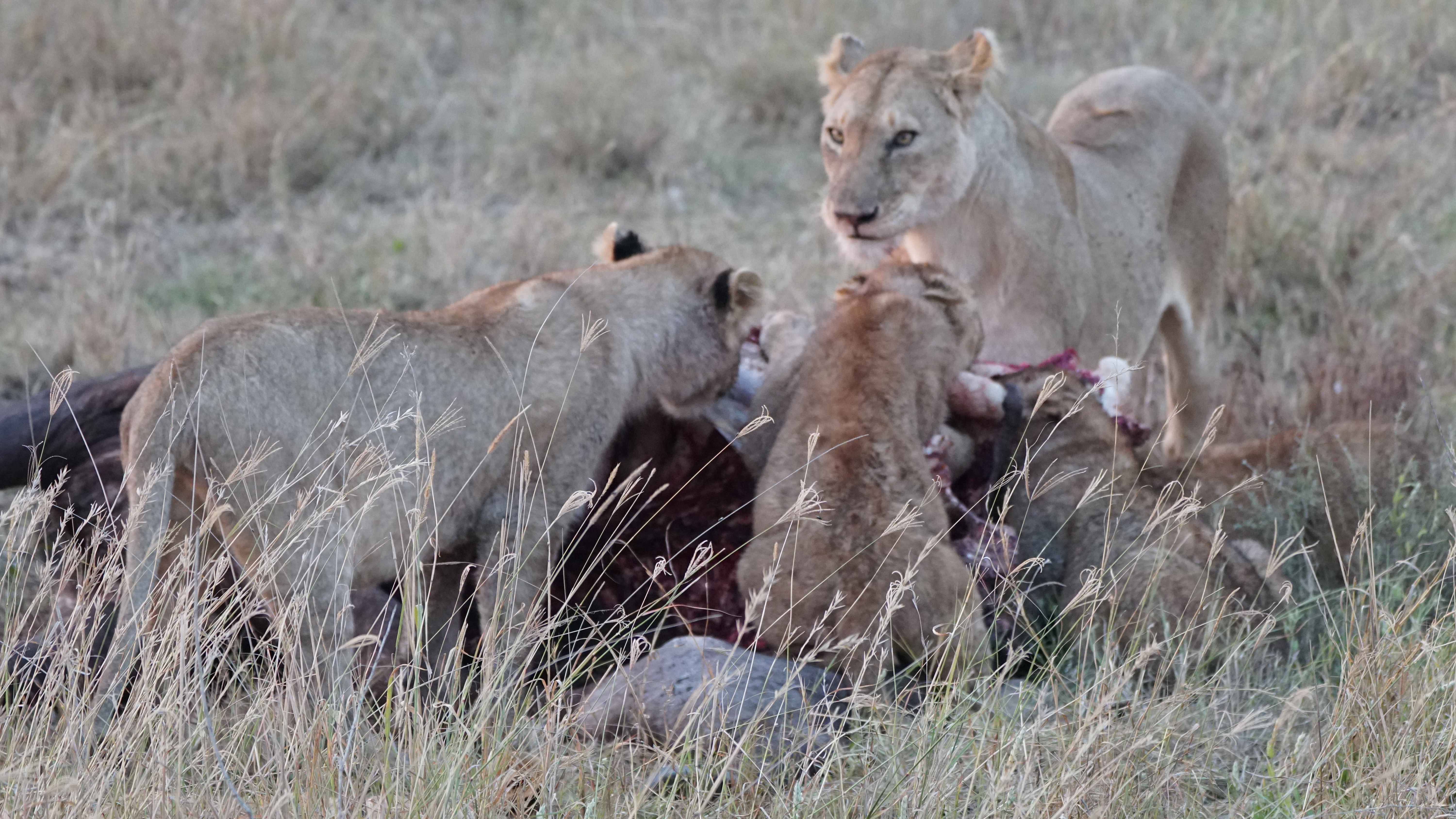 The most famous of the savannahs, the Serengeti National Park is 12,000 square miles of vast and beautiful wilderness that hosts one of the largest mammal migrations on this planet, making it one of the seven National Wonders of the Africa and one of the ten natural traveler wonders of the world. It is the greatest lion sanctuary on earth, and the best place to observe them in their natural habitat. There are just under 4,000 lions in the Serengeti. We are so excited to be here.

We caught two lions in a romantic moment…for lack of a better description, let’s just call them the honeymooners…

This romantic encounter usually lasts from ten seconds to a minute, and can happen up to 50 times a day during the mating period which generally lasts for four days. I’m tired just thinking about that! The female gives off a scent to let the males know that she’s available for mating. Why does the female get so upset at the male for a brief moment when the deed is done? The male has spines on his privates that hurt upon withdrawal. Ouch! But she quickly forgets, but this action is what triggers ovulation. Isn’t it fascinating how nature works? It’s so funny how it’s the female that collapses after it’s all over.

The females in a pride of lions can synchronize their ovulation so that the lionesses can give birth to their cubs all within a few weeks of each other. The advantage of that is that there is safely in numbers. They feed each other’s cubs, they all work together to protect and raise the cubs together, which helps increase the survival chances of the cubs. What an amazing, collaborative effort on the part of these mothers!!

Each year, when the grasses become dry, the great wildebeest migration begins in the southern Serengeti, moving clockwise north to the Masai Mara in Kenya, where the grasses are greener and more nutritious. Close to two million wildebeests cross the Serengeti, along with a million zebras, 500,000 gazelles, and other hundreds of thousands of other plains animals. When these animals leave, food sources become more difficult. The predator animals like lions, leopards, cape buffalos, cheetahs do not migrate. Crossing is so dangerous…fast moving rapids, lions on the shoreline, and crocodiles in the water all proving treacherous for all the animals, especially the little ones.

Life for the predators is difficult and precarious in this wide, unforgiving, sun-drenched landscape. Every day is a struggle for food, and with each conquest of a meal, their lives are at stake. Most male lions live about twelve years, some females live to nineteen.

Lions work together as a team to survive. A pride of lions can consist up to 30 lions. We came upon a pride of lions feasting on their morning kill of a cape buffalo. I’m sure that seeing a lion pride hunt is intensely exciting, I think I’m glad I didn’t see the actual kill.

There were four to six females with so many cubs, about 20 in total. The females usually bring down the kill, being more agile and smaller than the males. It is the male head of the pride eats first though, then the females, then the cubs. They start at the stomach and intestines, the most nutritious and delicious part. There was a lot of communicating, crunching, ripping and tearing, and low growling going on between all of them while they ate.

Once they have had their fill, they are down for the count, taking a snooze with all paws up in the air.

Lions stay out in the open plains and are on constant guard of their food. Hyenas, wild dogs, vultures, and jackals work in large groups to try to steal what they have, so it doesn’t surprise me that these lions all nap close to their kill. The advantage of the large pride is they can together devour the entire kill, without the worry of trying to store and protect it from being stolen. They do not have the ability to drag their prey up into the trees like the leopards. Lions can go four days without water, but they need to eat every day. A male lion eats about 16 pounds of meat a day, females eat eleven.

Even though there were twenty or so lions right in front of us, once they lay down in the grasses, we could hardly see them…perfect camouflage in their surroundings.

We were all wondering where the male lion was. He was hiding on a ledge in the tall grass, about 200 yards away, resting away from the pride, getting a little quiet time.

Once they have all napped for awhile, they came back for round 2. I thought it would take them a few days to consume an entire cape buffalo, but I think they will be finished with this one by nightfall.

One thought on “Lions of the Serengeti”