I can’t ever say that I’ve actually been inside a volcano, but that’s where we are today. The Ngorongoro Crater is the largest inactive, intact and unfilled volcanic caldera, 100 square miles wide, and 2,000 feet deep, which was formed after the volcano erupted, and then sank in on itself. That all happened over 2 million years ago. Now, it is the home for 25,000 animals that live in the crater.

Because of it’s bowl-like shape, eighty percent of the animals here do not migrate. If I were them, I wouldn’t want to make that 2,000 foot climb up the steep walls to the top edge of the crater every year either. About 20% of the wildebeests and half of the zebras do migrate though.

There are 60,000 Maasai who are allowed to live in this area. I can’t imagine living in a place where the wild animals roam free, and they seem miles away from any source of water, but their entire lifestyle and how they still maintain it today is such a mystery to me. They are herders for the most part, not allowed to farm, drill for water wells, or build any kind of permanent housing. They build their housing in a circle to keep out the wild animals…talk about living in the middle of nowhere!

We are so happy to see this guy…one of the rare black rhinos. They are critically endangered, just over 5,000 in Africa today. Their biggest danger is from illegal poaching and the black market trafficking of the rhino horn. They are generally loners, only coming together to mate.

This crater is considered one of the best places on earth to see lions. The lion population is isolated within this geographical area that there are research groups that know and study all of these lions and their prides. Their goal to restore the connection between the lions of the Serengeti and the crater to ensure their continued survival and future.

Oh my…another opportunity to observe a romantic couple, engaging without the use of the internet…

We hope to see the lions continue to prosper, having lots and lots of cubs, and remain a vital part of the Ngorongoro Crater wildlife.

I don’t really know what a mirage looks like to a person who’s hallucinogenic, been scorched by the blazing rays of the sun, and is parched from a lack of water, but I think this might be it. This beautiful fresh body of water sits in the middle of the crater, providing a welcome respite for all the animals who come to quench.

It is also a home for many hippos who sunbathe on the shoreline, and laze the day away in the cool waters. Chuck calls this place Hippo Heaven, and said that if he were a hippo, this is where he’d want to live…

The crater area is also home to the Olduvai Gorge, one of the most important and fascinating archeological sites of human life. Mary and Louis Leakey founded research programs with uncovered bones of early humans…from almost 2 million years ago.

Lucy is 40% actual skeleton of a upright walking female, which has made her one of the most important fossils ever discovered. She’s the most ancient human ever found. Her discovery, and all the research behind her, leads man to think that the origin of humans, as we know them, comes from Africa. She represents the ancestral split where apes and chimpanzees broke from upright walking humans.

These skeletons show that there was some sort of bridge between chimpanzees, apes, and man. I’m sure the debate will continue as to where man really comes from.

Not a chimp, or ape, and not quite a human, but walking upright…it’s a mystery!

As we leave the crater, we run into some friendly baboons. The babies ride under the mama’s chest for the first few weeks, then move to become little jockeys soon after. They are born with a really tight gripping reflex, and hang on no matter what.

I guess nothing says I love you like eating the bugs off your friends.

Well my friends, our journey to Kenya and Tanzania has come to an end. Africa is indeed a beautiful country, and it has been a gift to see these amazing animals in their natural environment and learn so much about them. It has been beautiful, heartbreaking, and magical to witness the stories and struggles for daily survival in the African savannah. Thank you for joining along with us. I hope you had a good time too. I know that this trip will be in my memories for a very long time to come, and secretly, I’m already thinking when can I come back again!?

If you’d like to learn more about the lions in the Ngorongoro Crater, check out kopelion.org.

2 thoughts on “Inside Ngorongoro Crater” 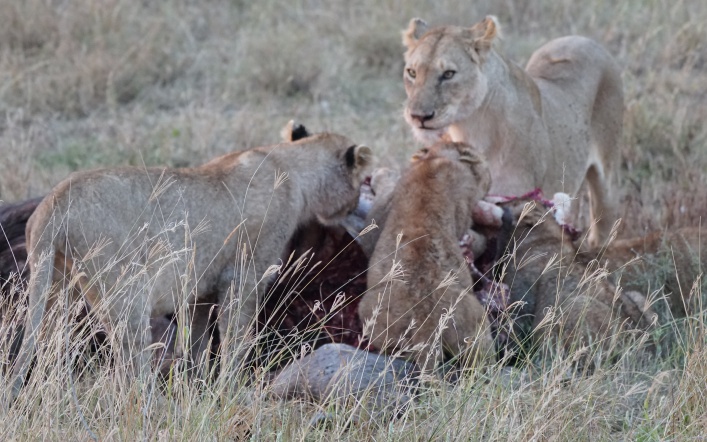