Where is Benjamin Button?

In the charming Garden District, oak-shaded streets line a mix of homes, a variety of architectural styles, from single-story cottages to the grand historic mansions and lavish gardens of St. Charles Avenue.

It’s pretty easy to get to the Garden District. We took a hop on-hop off bus with lands you right in the midst of antique shops and little boutiques, fancy restaurants, casual cafes and local bars all around Magazine Street, a trendy little neighborhood.

One of the most famous restaurants in New Orleans is here. It is rated tremendously high on yelp, and rumored to be the best restaurant in New Orleans, with a history of over 100 years. Emeril Lagasse and Paul Prudomme were both executive chefs here at one time. (Former brothel upstairs to attract the people off the river boats!) Gosh darn…wish we had time to eat here.

Another easy way to get here is by trolley car. From 1835, this streetcar line is the oldest in the world.

Before it was the Garden District, this area was several plantations. They were sold off in pieces to wealthy Americans who wanted to live outside of the French Quarter and away from the Créoles.  These homes showcase the opulence of the wealthy newcomers to this area and the prosperity of New Orleans during the 1840s. It was developed as the more spacious American district, where people spoke English and got away from the French speaking crowded city.

Some of these mansions take up entire blocks, hiding behind high shrubs and brick walls. Real estate in this area ranges from $1Million to $15Million. Does this one look familiar? This was the house of Queenie from the movie The Curious Case of Benjamin Button.

Traditionally, each block only had two houses, each surrounded by a large garden, hence the name. Some of the large lots were subdivided as uptown New Orleans became more urban. This created a pattern of 19th century mansions surrounded by “gingerbread” decorated Victorian style homes.

This home below was built as a honeymoon night house for George Eustis, a US Senator and supreme court justice, and his French bride. Once they honeymooned in it, they never moved out. It now belongs to Sandra Bullock, whose adopted son was born in New Orleans.

Trent Reznor, of the hard rock group Nine Inch Nails bought this home below. He had quite a few guests that were musically, rather noisy, to say the least. That did not please his neighbor, a woman who worked for several years on the New Orleans city council, trying to pass noise ordinances to curtail the sounds emanating from her loud next door neighbor. For years, she had the police pester him, trying to get the decibels lower in her neighborhood. After years of harassment, he finally gave up and sold the house.

The home now belongs to the actor John Goodman, who has lived here now for over 30 years. Acting as charming as she can be, our tour guide stands outside his front door three times a week, hoping one day he will come out and say hello to her. It hasn’t happened yet, but she’s still hopeful.

This home belongs to the famed writer, Anne Rice, famous for her books about vampires (Interview with a Vampire).

These were just a handful of the houses, one more beautiful than the next. How fun it was to walk this neighborhood and visit New Orleans history of its past.

Our friends Tom and Donna have special friends that live in this area…Cleve (with his wife Teresa) actually introduced them, and was the best man at their wedding.

Cleve is introducing us to one of his favorite places to eat in New Orleans…Drago’s. Their house specialty…char broiled oysters!

People come to this restaurant, and this is all they order, making an entire meal out of these; they are that good! The recipe seems simple: melted garlic butter slathered all over the top of oysters on an open gas grill, top with parmesan cheese, and give it a final ladle of garlic butter across the top. The trick is in the gas grill. Spritz the flames with water so the flames fly four feet up into the air several times, surrounding the oysters to get the charbroil just right.

All I can say is, Don’t try this at home! You’ll probably set your kitchen on fire! I’m really glad I’m not the one cleaning that stove after making these too. Verdict: Fabuloso!! You cannot get them anywhere else but here. They are absolute must haves when you come to New Orleans.

That’s it for this trip my friends. Thanks so much for following along. I hope you had as much fun as we did. See you soon on another adventure!

3 thoughts on “Where is Benjamin Button?” 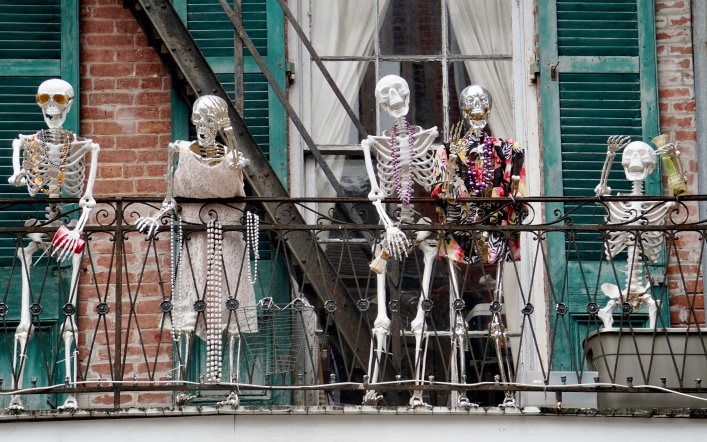 We’re taking a roundabout way home, a slight detour to stop off at “the “Big Easy,” the nickname for New..