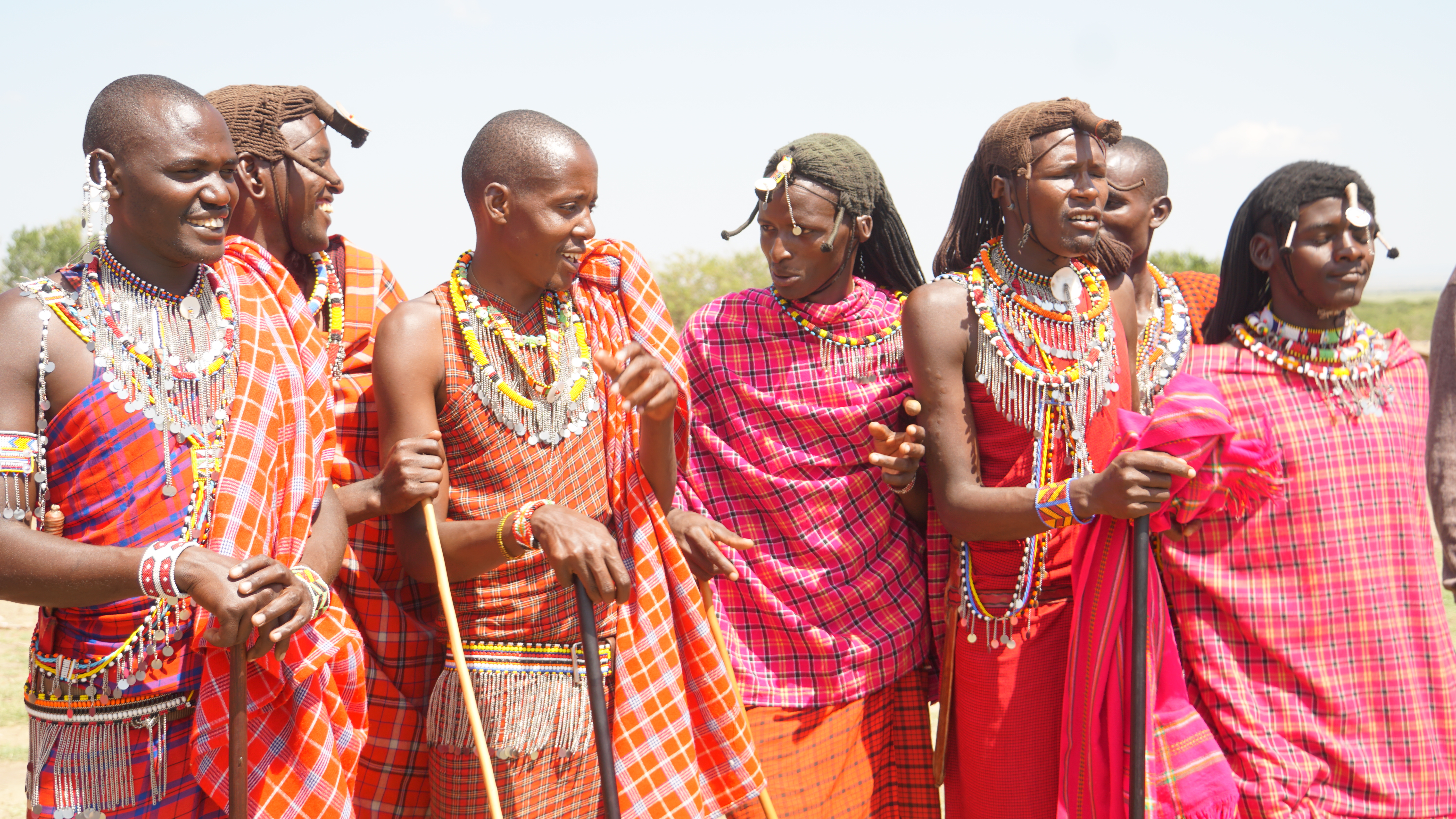 I’ve been really surprised by the names of the people I’ve met here in Africa. Having been a German and a British colony at various times, they all speak with a charming British accent in their English, and their names have been Steve, Bob, John, and David. How very American/English! But I’m meeting tour guides and hotel workers who are all accustomed to American foreigners who come to visit their country. A few of them have very creative names like Goodluck, Begood, and Bestwishes. One of our guides is named Wolfugan, named while his grandfather was in Kenya when the country was under German rule. Such a surprise to this American here.

Not all of Africa is so used to the modern world and American tourists…there are over 3000 tribes in Africa who speak over 2,000 tribal languages. We are visiting one such place today, a Maasai Village.

The Maasai tribe of Africa is long steeped in their tribal traditions, with permission from the government to maintain their tribal ways and live within the national parks, among all the wild animals that roam free. There are about one million Massai that live in Kenya and Tanzania.

Although we were told not to wear red, to blend in with the environment, the Masai warriors are wrapped in a shuka, a red plaid blanket, worn as tradition, and red, to scare off lions from a far distance. Some say the plaid came from Scottish missionaries in the 1960s, where it replaced animal skins. They also have other colors like blue and green, but red seems to be the most popular color.

Maasai jewelry, created with beads and metal wire, is just as famous: men wear wrist or ankle bracelets, with belts and necklaces, while women show off an explosion of color and jewelry. They wear tens of bracelets and big flat bead-decorated collars in various patterns and colors, that identify the clan they belong to and their social status. The number of necklaces they wear shows how many girlfriends or boyfriends they have. Each of the colors used have a meaning: White symbolizes peace, blue is the color of water, and red is the symbol of warriors and bravery.

Being nomadic people who predominately are livestock herders, they have maintained their traditions even in the midst of the modern world progressing around them. They still live as their ancestors did for decades before them. Children can run and play until they are age five. After that, boys start taking care of the herds, and girls start to learn domestic skills from their mothers.

The welcoming song by the tribe is a little intimidating and so interesting to say the least. They line up in a row, as do we, in a row opposite them, as if we were all going to play water balloon toss. Slowly they move towards us, bouncing and chanting a haunting song, completely invading our space and surrounding us with their hypnotic sounds which we have never heard before.

Their songs are about happiness and love, praying for God to bless the livestock, provide clean water, and bless them with children.

They are very famous for their jumping dance. Boys start their training very young, learning to jump very high as a symbol of their strength, hoping to attract a future wife by their athletic attributes. It looks amazingly simplistic, but once you start comparing their jumping to the western visitors, it certainly provided some great laughs on both sides. These guys jump so high that they really look like they are on pogo sticks!

I wonder if there is any trick to the shoes they wear that gives them that extra spring in their jumping? Their shoes are actually made out of old tires.

They protect themselves by building their houses in a huge circle, livestock in the center, so that wild animals cannot come into their compound. They are simple homes, made out of clay and mud, with one door, and sometimes with a window.

The interior is complete devoid of light so it’s incredibly dark inside. Through the magic of photo apps, I was able to lighten this so you could see the inside. Cooking on stones over a real wood fire, washing dishes on a small wooden bench, and sleeping on each side of this small kitchen is about the extent of the space. It gets really hot and smoky inside quickly, which made us exit after just a minute or two.

Their diet is extremely limited. For the most part, they eat meat, milk and blood. On occasion, they supplement with fruits and grains, but if you ask a Massai, they will say they don’t eat fruits or vegetables. Blood is obtained by nicking the jugular artery of a cow precisely, obtaining the blood without injuring the animal. Mixed blood and milk is used as a ritual drink in special celebrations, or given to the sick. In spite of their ridiculously limited diet, they look very healthy to me.

Elaine was a sales representative for National Geographic Books, so she brought over a hundred books to give to children, and took the opportunity to give them to the little ones in this village. While she was trying to teach animal names in English to this little one, he’s trying to teach her the names in Swahili!

As you can see, the books were a huge hit!!

I had a few fans myself because I had a few beanie babies I gave away.

Maasai women have a tough life. Like the men, they are circumcised between the ages of 11 to 13, a ritual ceremony that is a sign of moving into adulthood, and soon afterwards will probably marry a man chosen by her father in exchange for cattle and cash.

She will be one of multiple wives, and will have many children, regardless of her health or ability to provide for them. She will rise early every day to milk cows, and spend her days walking miles to water holes to launder clothes and get water, and to gather heavy loads of firewood to carry back home. If she is lucky, she will have a donkey to share her burden. She will live a life of few physical comforts, will be dependent on a husband, and will live where her husband lives. If she marries outside of her immediate tribe, she will move to another tribe and follow her husband.

Here, these women, who are sewing beads, are explaining to me about the fancy necklaces they wear, one necklace is for each boyfriend they have. I was trying to get an answer for the question if they broke up with their boyfriend, would they have to remove their necklace, but I never quite got that answer.

It was very interesting to find out that several of the men work outside the Tribe to earn money. Many of them work at the safari tent camps that we are staying at during our trip. They go to the tent camps, stay for a week, or a month, or six months, and then return to their village on their days off. When they are outside the village, they dress in pants and shirts, when they return to the village, they resume to their tribal culture and traditions.

One only has to spend a short time here to be reminded of how very lucky we are to live the lives that we do, outside a Maasai Village.