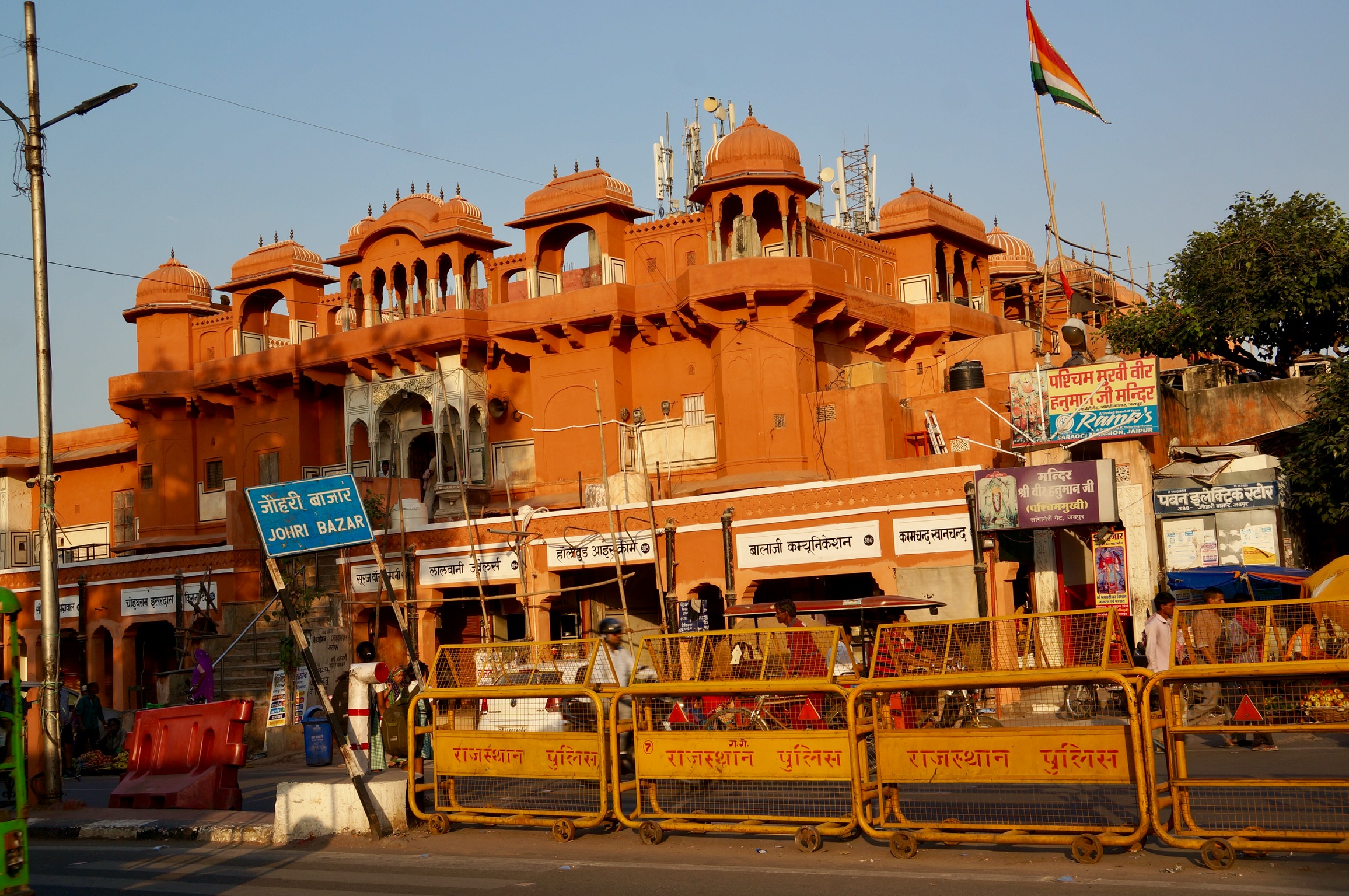 We’ve traveled six hours to a new capital city named Jaipur, nicknamed the Pink City because it was all painted a pink (brick red really) to welcome the Prince of Wales in 1876.  With a population of 3.1 million, it’s the tenth most populated in the country.

The lattice work over the windows allowed the royal ladies to watch the happenings of everyday life without being seen.  There was a time when Indian women have veiled faces because Muslims would steal the beautiful Hindu women. When their faces were hidden, they could not tell what the women looked like, thus protecting the women from being abducted.

This is a fabulous city for shopping.  You can look in every direction, and no matter which way you go, there will be shops with so many souvenirs, you’ll need an extra suitcase.  Take caution though…there are hawkers outside of each establishment to lure you in.  You’ll need to bargain.  They will take you for whatever price they can get.  I bought a pair of rayon pants – they started at $60 US.  I got them down to $6.75 and pity the poor tourist that doesn’t know how to bargain for a deal.  If I had a little more time, I could have gotten it down to $5.

We traveled to Abhaneri, a small village outside the city.  This area was very arid and dry, so King Chanda built this stairwell in 800AD to collect rainwater.  It became a communal place for people during times of great heat, and a place for them to collect water for their needs.  There are over 3500 steps descending 100 feet to the bottom.

On the opposite sides, Hindu temples were for Royalty.  It was generally the women that had the task of fetching the water.  I cannot imagine lugging the water back up to the top in this 95° heat!  The poor women!!

Although there are no longer royal families with power, they still do exist, but only have to status of regular people.  What remains of some maharajas still live in the royal residences, but have turned most of the properties into museums.

Traffic in India is quite crazy.  The roads are often two lanes in each direction with no lines painted for lanes.  Your car shares space with motorcycles, bikes, camels, water buffalos, cows, monkeys, motor rickshaws (3 wheelers), donkeys, and people crossing every which way, with all having the right to be on the road.  If that isn’t crazy enough, the all important sacred cows seem to prefer sleeping on the left, right, and center of the road.  Add a few snake charmers, people trying to sell you things at every intersection, and fruit and vegetable stands everywhere, and people all looking for a handout, and you will will have an idea of walking the streets of India. 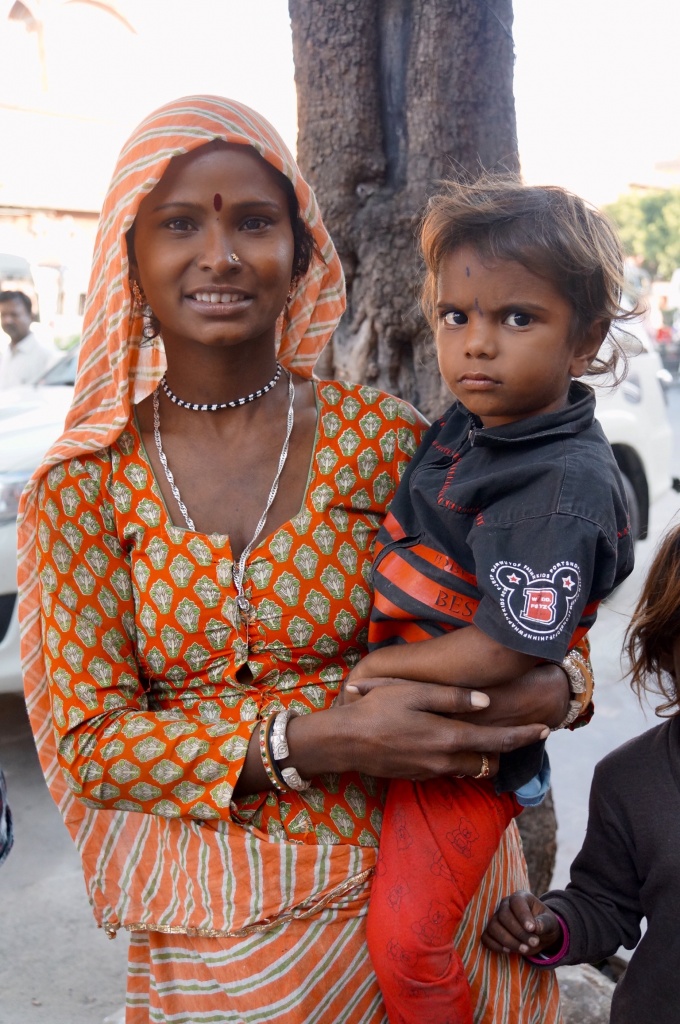 3 thoughts on “The Pink City…Jaipur” 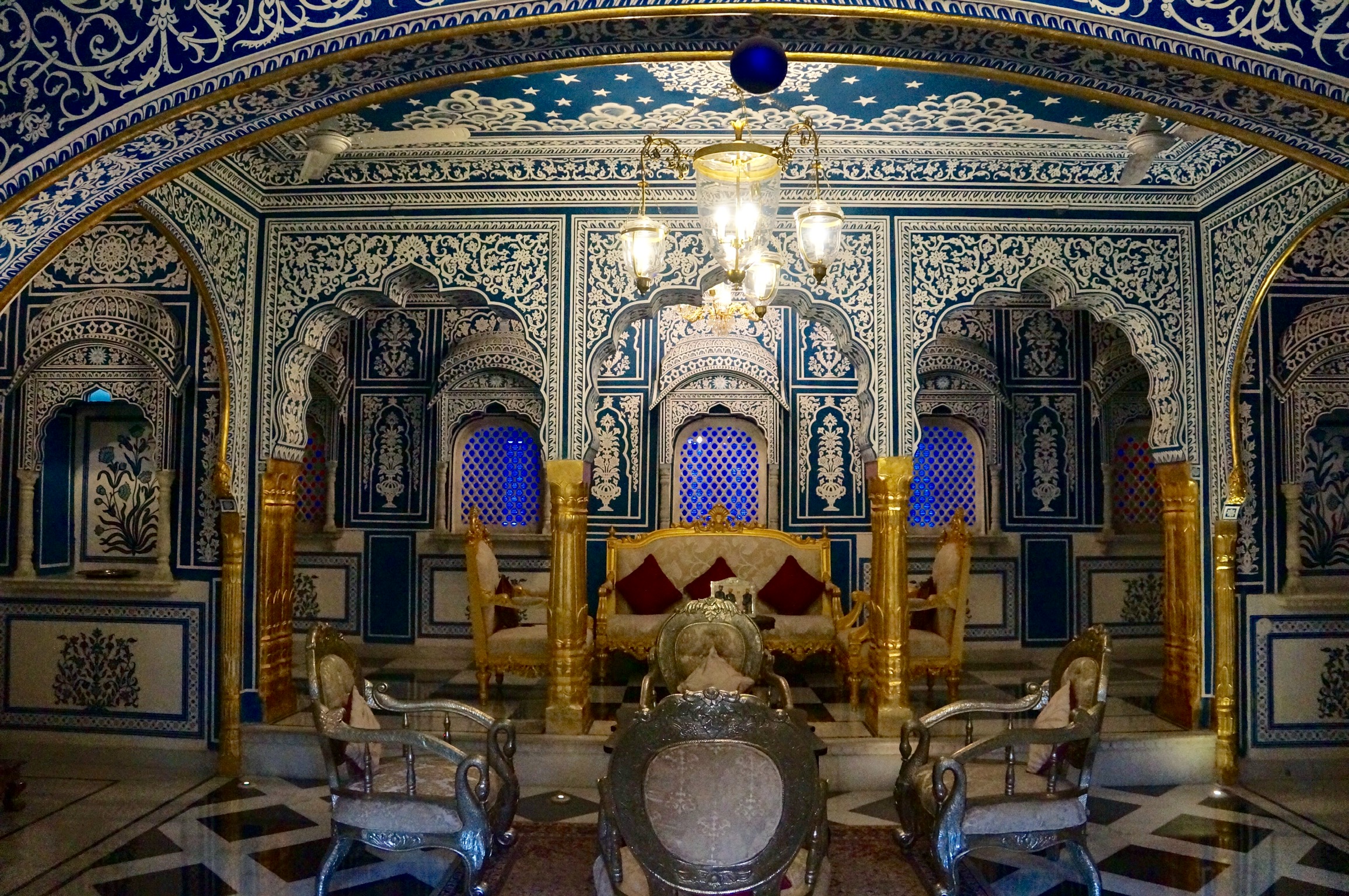 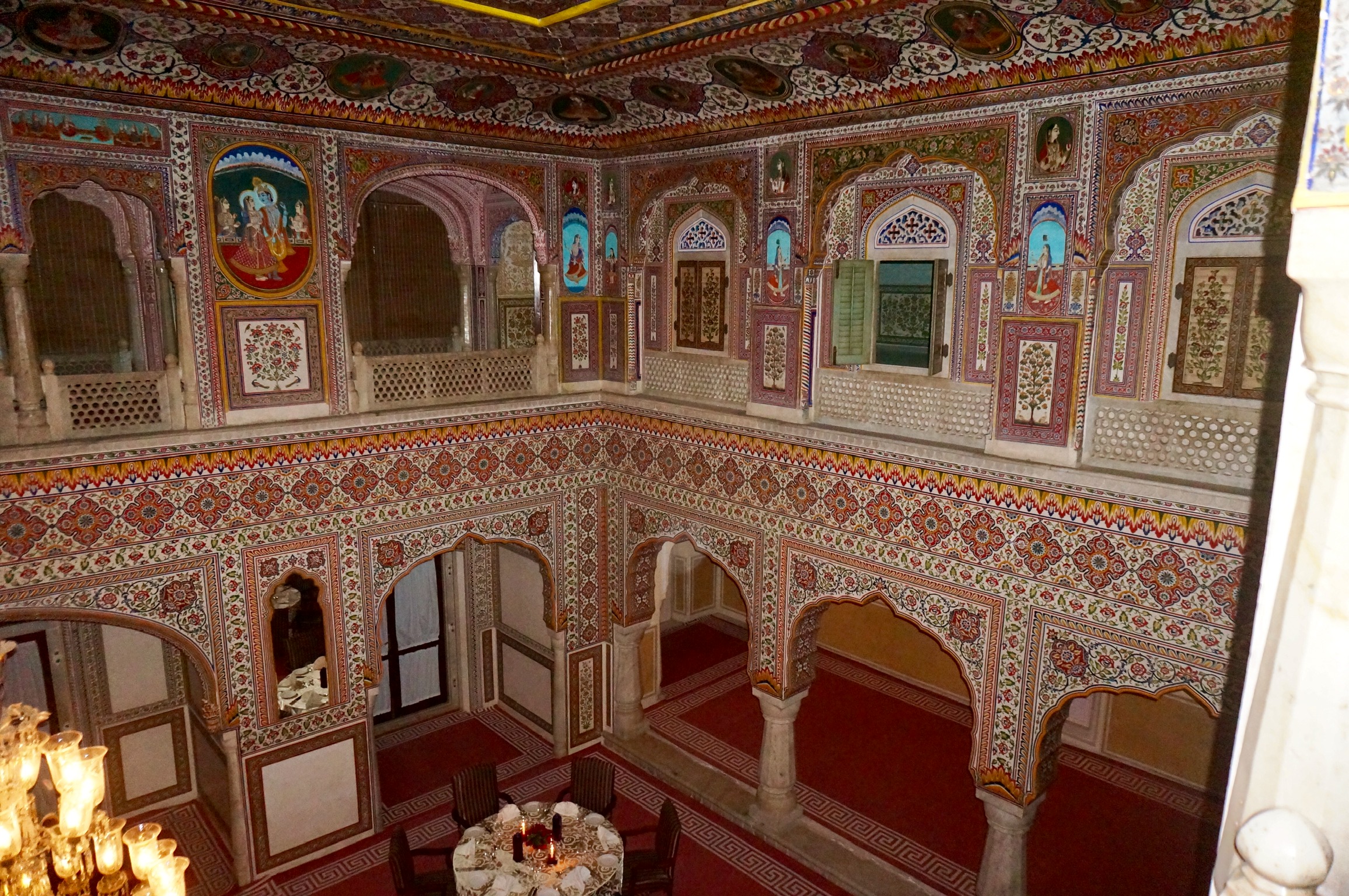 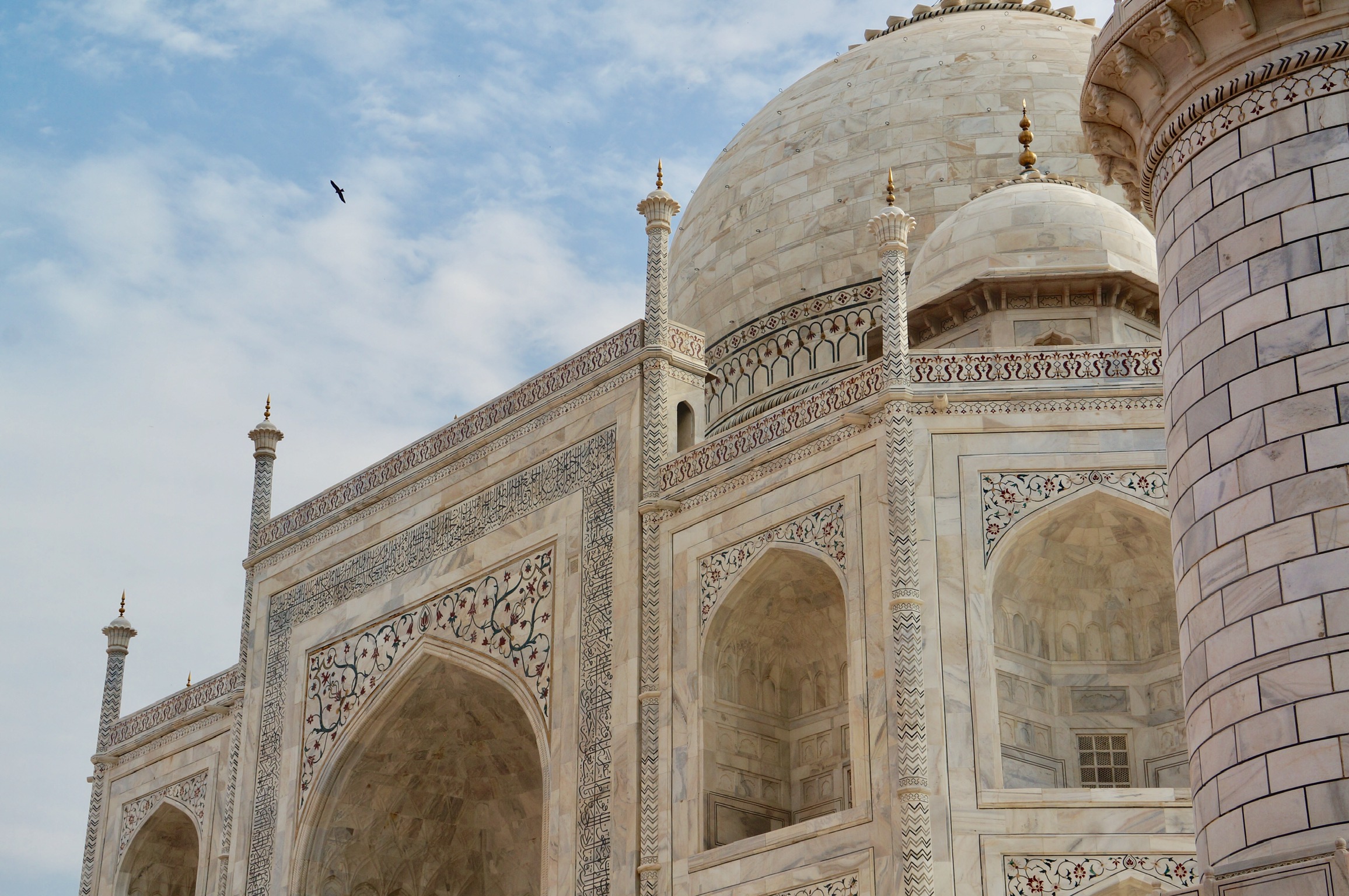 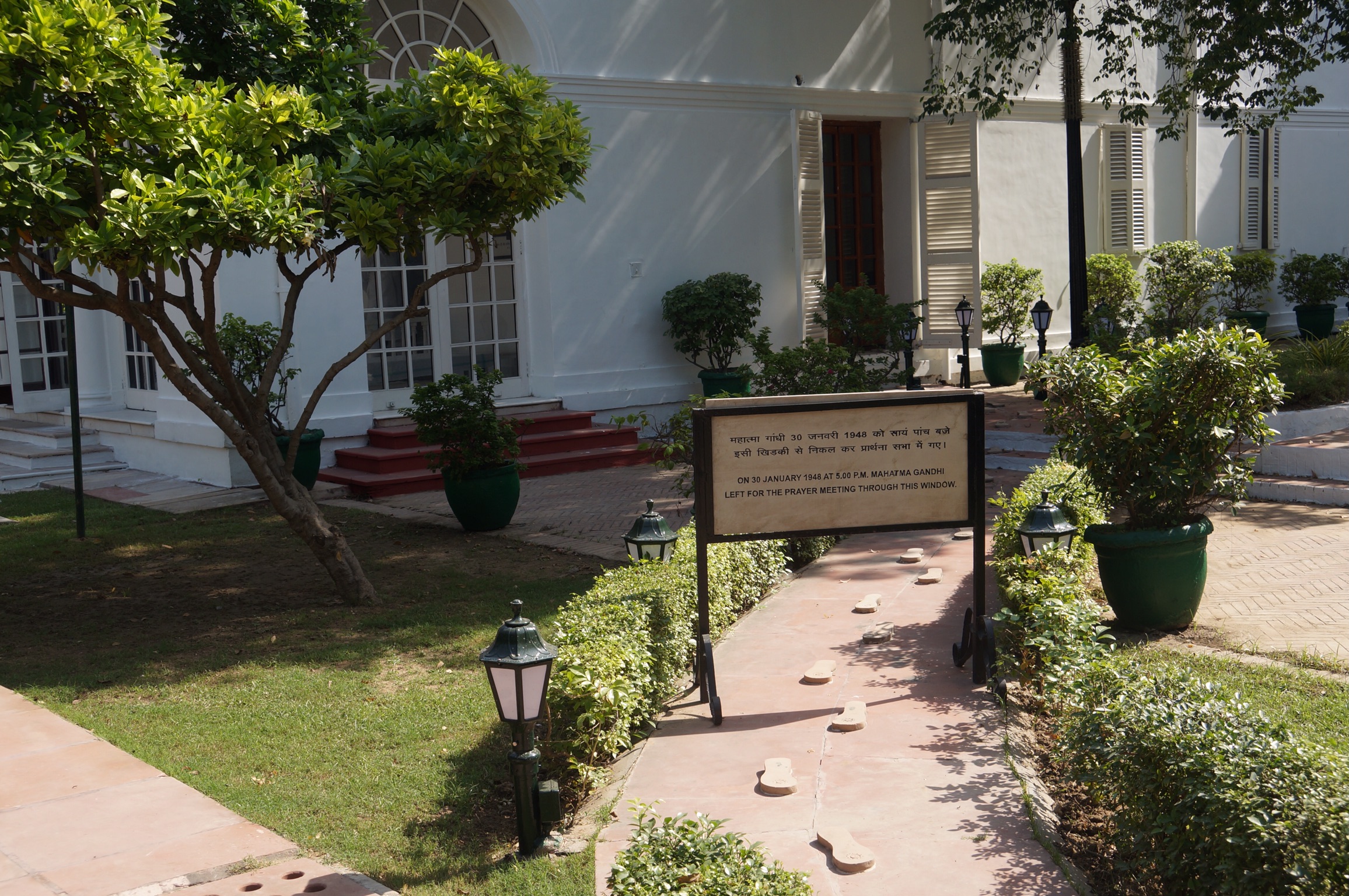 From the platform of a certain mosque, in one direction you can see where all the Hindus live, a generally..