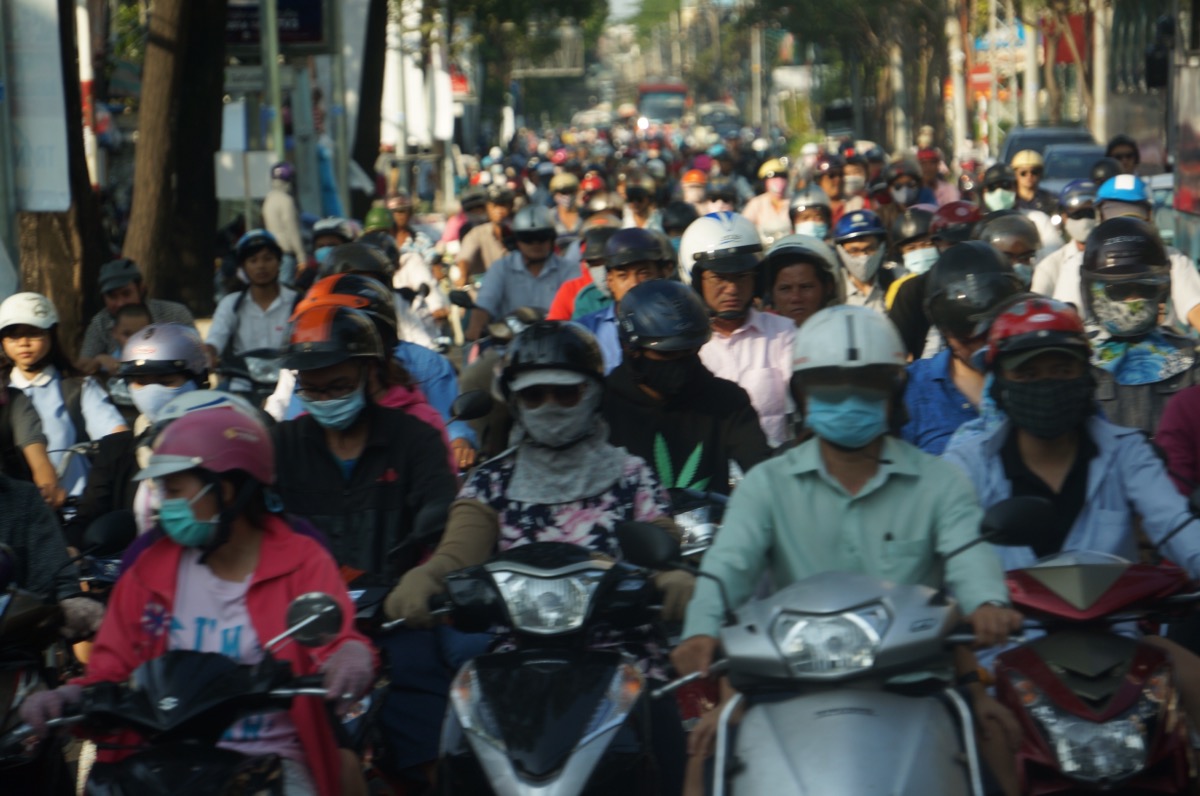 It only takes a second to realize that we are back in a very big city. Ho Chi Minh City, formerly called Saigon, was once the former capital, which was later moved to Hanoi. With a population of 9 million people, it is a constant swirl of traffic, with over 5 million scooters, with about a 30-to-1 ratio of motor scooters to cars.

The biggest obstacle is trying to cross the street. There seems to be no end to the constant flow of vehicles racing by.  Our tour guide says just walk into the traffic like you’re a 90 year old person, don’t go backwards, don’t run, and all the scooters will just magically go around you.  So far, so good.  None of us has gotten run over yet.

In 1859, France colonized and occupied this country for almost 100 years, and evidence of that is everywhere.  Many of their buildings are European in style.  I didn’t expect this.

Vietnam is a country known for their handicrafts, employing hundreds of thousands of people. Ho Chi Minh is specifcally known for their lacquerware, and we visited the Minh Phuong Lacquerware Factory.  Wood is sanded, painted, embellished with mother of pearl, eggshells, filled, painted, and then lacquered with 18 layers.  It’s a process completely done by hand.

We went to one of the marketplaces to get the flavor of the local life.

Although we heard a lot about journalists who stayed in various hotels, ate at certain restaurants, reported on the war from this or that location, but much of that all seems to be in the past.  The reminders of the Vietnam war are far behind them.  A new generation carrys on…the median age of the population now is 30 years old.

Tom chose to visit the Cu Chi tunnels, a 75 mile network of narrow tunnels that were used by the Viet Cong to hide during the war.  Our tour guide’s father was on the side of North Viet Nam and actually fought and lived several years in these tunnels.  Some Viet Cong were in the tunnels for longer than ten years.  How strange life is that now, his son gives tours of the tunnels to Americans.

Here’s a little sample of what you have to deal with if you’re driving in Ho Chi Minh City.  They are all waiting for the light to turn green.  If you look closely, you can see a car sandwiched in between all the scooters…it’s pretty crazy, isn’t it?