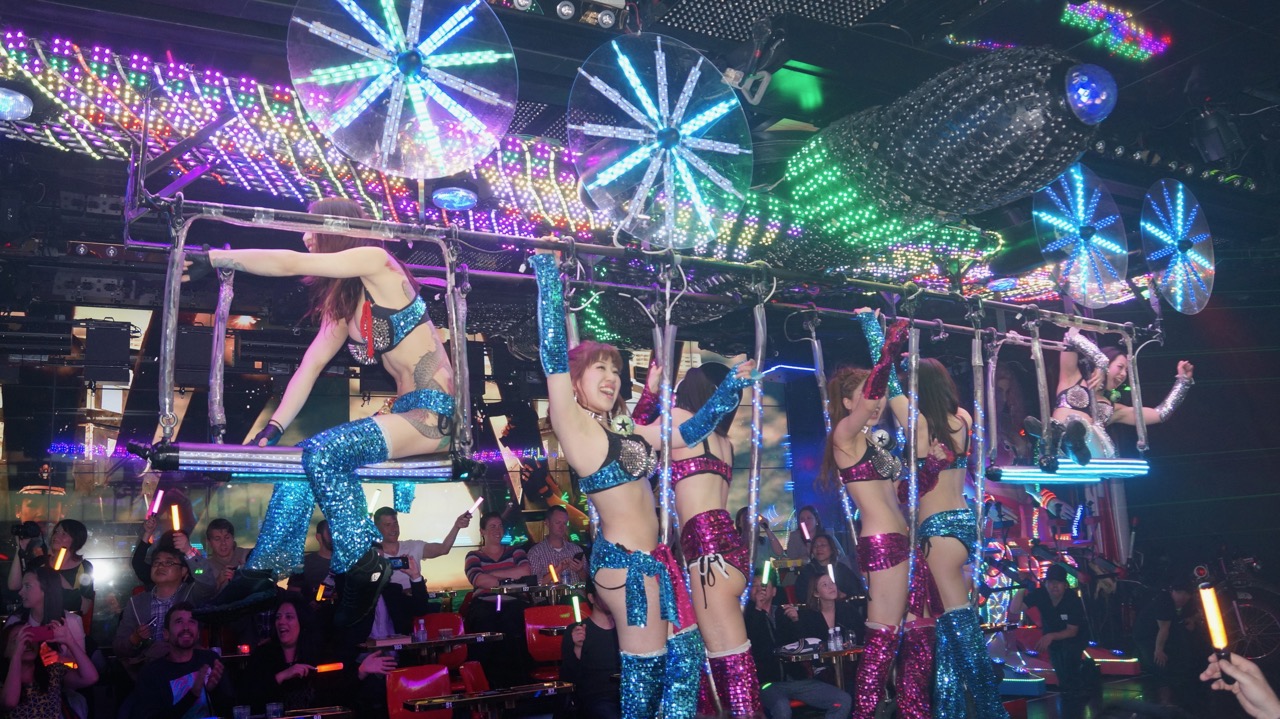 Our hotel by the Tokyo train station was a business district called Chiyoda. Every morning we watched the parade of workers in their black uniforms rushing off to work.  It seems like almost everyone wears a black suit, white shirt and tie, with women wearing black suits as well. It’s a very formal look. We have moved hotels 15 minutes west to a new district called Shinjuku, where the mood has changed completely. The plethora of neon signs reminds me of Times Square New York and Hong Kong, the crowd much younger and punkier, and the streets are filled with shopping, and night clubs.  It’s a buzzing hive activity, and we were just amazed at the number of people crossing at an intersection.

While perusing Trip Advisor, Chuck found the top two things to do in Shinjuku were #1:  Shinjuku Gyoen National Garden and #2:  Robot Restaurant.  Really?!  Japanese robots are crazy cool. Girl robots even cooler.  Add sexy girl dancers, turn it into a cabaret show,  and you have a new type of entertainment for our times of the video games generation.

When you first walk in, you already know something is different than anything you’ve ever seen.  The band members at the entrance are wearing costumes that look like they are out some Japanese Space comic book, another riding on a giant fembot, gliding around the floor.

The elevator to the waiting room is fully crystal mirrored on top, sides, and bottom with led lights reflecting all around to a dizzying effect.   The waiting room is all decked out in gold and mirrors, like a Liberace palace gone crazy.  On our final descent into the basement, where the show takes place, there are giant butterflies painted on opaque glass walls, topped with three foot long glazed geckos and day of the dead skulls.  It’s all crazy bright and busy.  As we walk to our seats, we pass right by giant robots sitting quietly in the dark, stacked on top of each other, and we wonder how that’s all going to play into the show.   The stage is set up like a wide runway, with stadium seats with small tables along on both sides.  The three rows of tiered seats assure that there is not a bad seat in the house and everyone will get a great view.

What follows is a fast-paced revue of dancing girls, glitz, seizure inducing flashing lights and special effects synchronized with the massive LED screens covering the walls and ceiling integrated into each routine. The dancing and bikinis are PG13 and the girls are all so adorably cute.  How could you not like little Asians in bunny costumes playing drums and singing to Dreamgirls? Dance routines currently run from taiko drumming fantasies, to battling space robots with giant tarantulas, to army girls draped over the neon tank and an airplane flying overhead bringing in girls in on trapeze swings.  Sometimes you’re not exactly sure what the theme is, but…does anybody really care?

The highlight of the show is the appearance of the huge terminators which seem to almost attack everyone sitting in the front rows, along with the gigantic, busty  warrior- princess Fem Bots, mounted with five dancers, which glide aound the dance floor.  All the robots have moving parts – arms, legs, head, fingers, torsos, and mouths.  Add flashing laser beams and sound effects, LED clad robots on space age bikes, CP3Os, and sequined bikini clad dancers and you genuinely feel as though you are living inside a terminator Sci-Fi movie. I’m sure while you’re reading this, you’re going to think I was smoking something funny, but this is the wackiest, most zany, wackadoodle show I have ever seen.  It was an hour and fifteen minutes of great fun for $60.  It’s a MUST SEE if you’re ever in Shinjuku.   I don’t think there’s anything like this anywhere else in the world…not even Las Vegas!