We are in Amman, the largest city of Jordan, its economic and cultural center.  It is also one of the oldest cities on planet Earth, going back to the Stone Age.  We are talking about people living here 6500 years BC!  The houses are built on top of old ruins.

We headed to the Amman Citadel, an ancient hill where many of the cities oldest sites remain.  A museum on the site holds a well known for a set of small human statues found in 1983, dating back 8000 years, the oldest known anywhere. 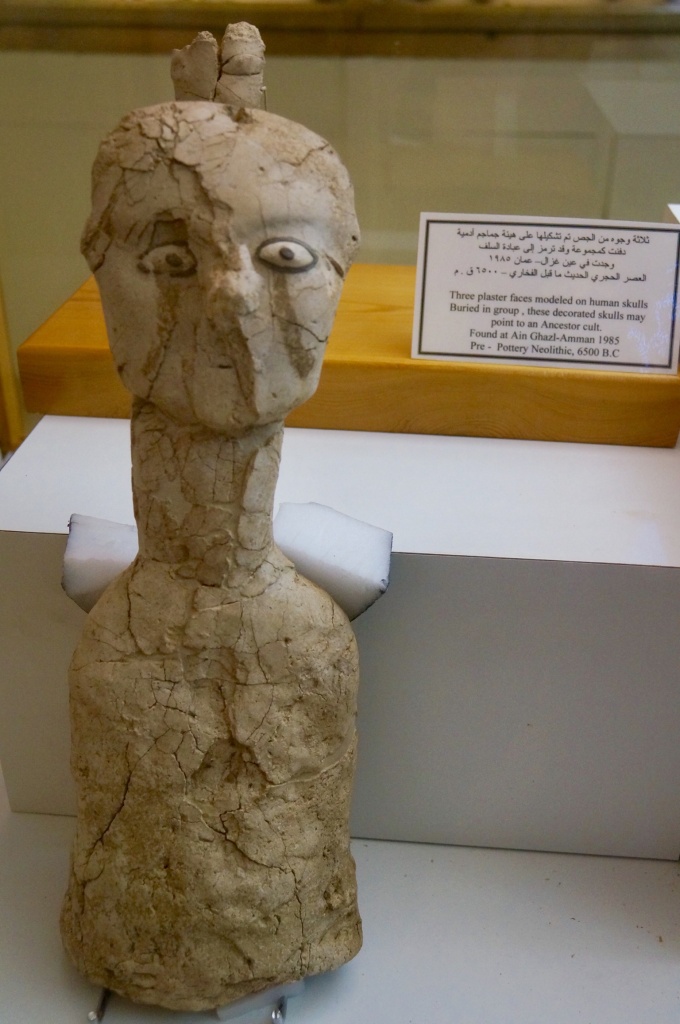 They are human figures made with white plaster, with painted clothes, hair, and in some cases ornamental tattoos. Thirty-two figures were found in total.  What an amazing find!   Jordan kept four of the statues, and shared the other 28 with other major museums around the world because of their great historical importance. 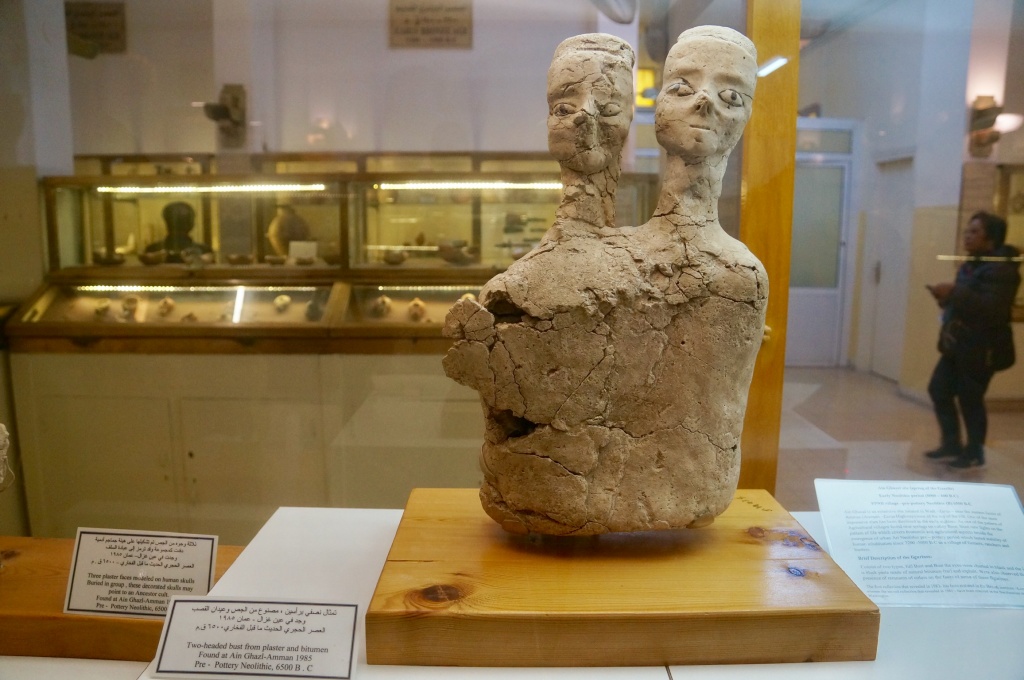 The local Jordanians call them the Michael Jackson statues because of the similarity of the noses.  What do you think?  I think they might be right…

As with so much of the Middle East, there have been so many who have ruled this area, with each conqueror destroying the buildings, fortresses, and temples of those that went before them.  This Citadel shows the remains of its long history of occupation by many great civilizations, from the Stone Age, Iron Age, Bronze Age, the Greco- Roman, the Byzantine and Umayyad periods.  It’s amazing that each of these ancient civilizations has left their footprints here in this city.

Amman’s Roman Amphitheatre was built in the 2nd Century, is still used today.  The Romans were smart to always orient their seats to the North, to keep the sun off the spectators.  The last person to perform here was Andrea Bocelli.  Bring your own seat cushion…those stone seats might be a little stiff on your buns after awhile.

We traveled half an hour to the city of Jerash, one of the largest and most well-preserved sites of Roman architecture in the world outside Italy.  We are finally in a place where ruins don’t look like ruins!  We can actually see what buildings looked like in their original forms.  How wonderful to be able to see the detailing and sophistication in these magnificent structures from the past.

This arch, built outside of the city, was to honor of the visit from the Roman Emperor Hadrian in 130AD.

Why has this city been so well preserved?  How has it survived multiple earthquakes over the thousands of centuries?  One answer may lie in the secret construction of the columns not found anywhere else in Roman architecture.  Most Roman columns were made of limestone.  One just has to knock on the columns in Jerash to discover that they were made of metal, disguised as stone.

Waleed, our amazing Jordan tour guide, placed a screw driver at the base of the column and demonstrated that with a little encouragement, he could shake the entire column.  You could look up into the sky and see the rocking and swaying Corinthian columns as well as the screwdriver moving up and down, a testament to the ingenius construction of these structures.

Making the columns out of metal with a flexible base was a stroke of brilliance designed by locals in the area since it has not been found anywhere else, which may account for the lasting of this ancient site in such incredible condition.  Some say it was the Nabataeans, but no one knows for sure.  It’s just brilliant considering we are talking about the 1st CenturyAD.

At one time, Zeus was the most powerful god to the Romans.  When the Christians refused to sacrifice animals to the Roman god Zeus, they were taken and punished by being fed to the lions in the Coliseum.  As fascinating as these ancient ruins are, there are some things about those Roman times that I’m really glad are over.

Lawrence of Arabia in Wadi Rum

Light, camera, action!  You may not know Wadi Rum, but you might have seen it if you’ve been to many..

Ever since I saw Indiana Jones and the Last Crusade, with Sean Connery and Harrison Ford galloping off into the..

According to the Bible, Moses lived to be 120 years old.  The first third of his life was spent in..

Jesus is baptized in the River Jordan

We left Israel and have moved into the country of Jordan.  It’s a bit nerve wracking since our Israelis tour..