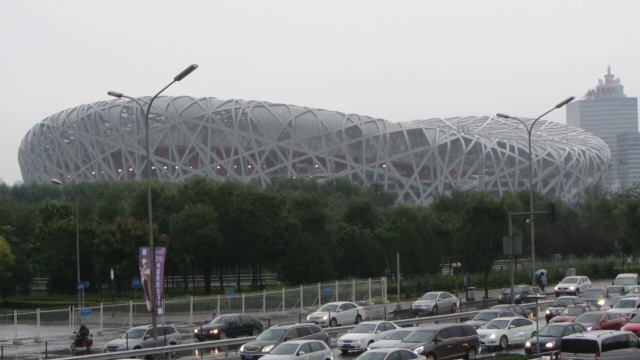 There are so many people here that they have to have a lottery system to be selected to have permission to buy a car. Sometimes you will wait up to a year. There really is a one child rule…if you have a second child, they won’t allow the child to be registered so he/she cannot get a social security number to be able to work later, etc. With 1.4 billion people, they certainly have a population problem.

I know some of you have been on the Great Wall but you haven’t really had the challenge until you try to do it in the rain with thousands of other crazy people doing it too, with everyone carrying umbrellas. Chuck’s sister Barbara got dizzy just looking at the steep steps, which are uneven and hard to climb. We made it to the fourth tower…along with thousands who were sliding on the road along with us.

We went to a cloisonné factory and watched girls hand glue copper wire onto copper vases, hand paint, fire, and glaze seven layers of enamel, to create the beautiful works of art that were once reserved exclusively for the emperors. I would go blind trying to do this intricate work!

Our last stop was to the Ming tombs, the garden of serenity which leads to the burial place of all of the Emperors, empresses, and concubines during the Ming Dynasty. the most famous was Emperor Zhu , who built the Forbidden City, this garden and tomb for his wife, and the Great Wall. No wonder this site looks so similar to the buildings in the forbidden city.

Last stop, you might recognize the Birds Nest…absolutely beautiful in person. 92,000 seats and the singer who promoted it the most and had a sold out performance…you’ll never guess…Jackie Chan!

Yep…My legs are getting tired…and it’s only day 2 of touring!!