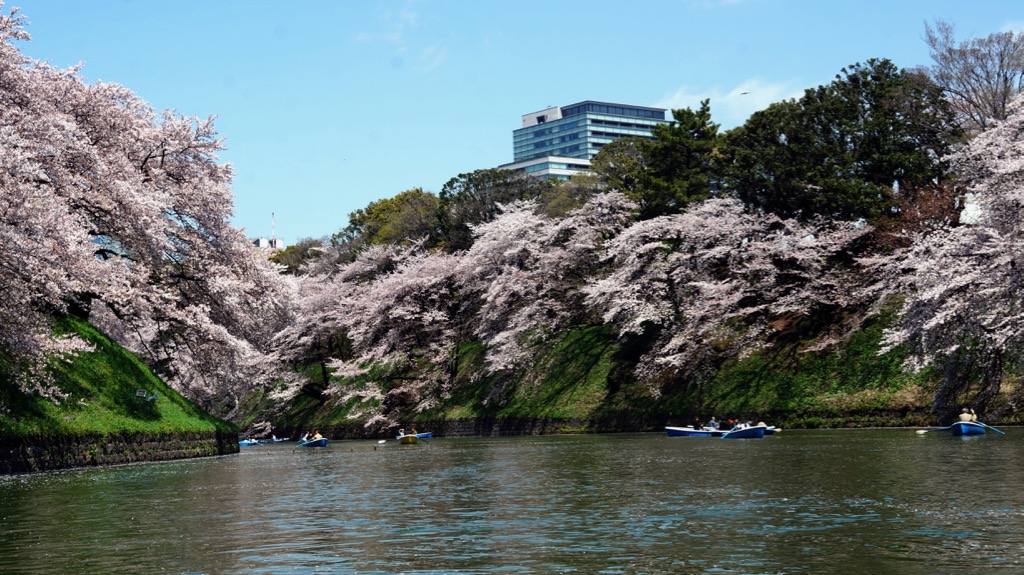 In many ways, Tokyo is very similar to any other big city in the US.  Since most of it had to be rebuilt after World War II, at first glance, it’s buildings could easily be mistaken for Chicago or New York, except for two things…the Imperial Palace in the center of the city, and the beautiful cherry blossom trees. Sakura, or the viewing of cherry blossoms, has long been a symbol of Japan and has been loved here for hundreds of years.  The blossoms are in full bloom one week after the first buds appear, and another week later, the blooming peak is over and the blossoms start to fall from the trees.  We are totally in luck with perfect timing…the blossoms are in full bloom while we are here in Tokyo. We walked from our hotel near the train station to the Imperial Palace. What started as a beautiful morning walk turned into a sea of people as we got closer to the palace.  We were first joined by dozens, which turned into hundreds, and suddenly thousands, all walking forwards the palace.  It became a total mob, with no one moving anywhere, which is exactly when we said…ok, another day for the palace.  It turns out that today was the first day that they have opened a new wing of the Palace, never open to the public before.  I’ve waited this long, I guess I can wait a little longer.

Okay…plan B.  We continued walking around the perimeter of the Imperial Palace to Chidorigafuchi Park, a picnic place with cherry blossom trees spanning for blocks.   We’ve all seen cherry blossoms before, but when you see hundreds of them together, it does take your breath away.   With a sudden, gentle gust of wind, thousands of pink and white blossoms come fluttering down around you, like gentle butterflies falling from the trees.  It’s indeed a beautiful sight.  Some of these parks have up to 1,100 cherry blossom trees.

Keep walking around the perimeter and you’ll find yourself at the boat docks.  For $16, you can rent a rowboat and spend a lazy hour paddling down the lake through a forest of cherry blossom trees, lining both sides of the bank, under the gently falling rain of petals falling softly around you.  If we had known, we would have brought a picnic lunch.

One thought on “Sakura Cherry Blossoms in Tokyo”