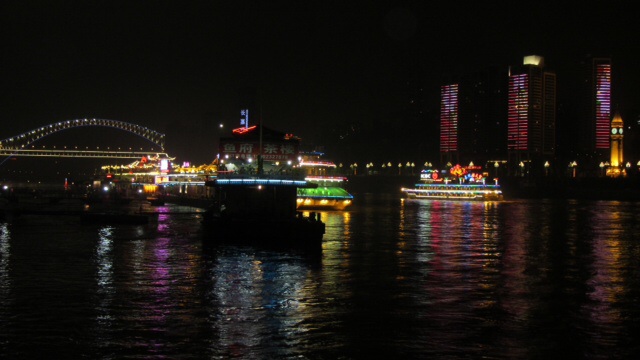 I’ve never heard of this city before, but it is the largest city in China with a population of 33 million. Holy mackerel! Apt buildings raise up into the sky and there are blocks and blocks of identical ones that I would be confused trying to find which one was mine. Sometimes it’s just a sea of people here.  To a great extend,  this city had to be rebuilt because a lot of it was bombed by the Japanese during WWII.  Pictured here is the residence and rooftops of the first Emperor of Chingquin, Emperor Yuu.

The most famous residents of this city don’t reside in a temple or palace, but at the Chingquin zoo…They are absolutely adorable and hard to believe they are really bears. We got really lucky. Our tour guide said that most of the time when he comes, they are sleeping with their backs to the crowd. But we saw them upright and eating. All they seem to do is roll over to grab something to eat and roll over to sleep…Chuck says he’s working his way towards their idealistic lifestyle.  How cute are these guys!?!?

We’ve boarded a boat and will be heading down the Yangtze river over the next three days. I don’t know what’s coming next. It’s been fun to watch the riverboats passing by as the sun sets. Apparently, Chingquin has a booming dinner cruise business since we’ve seen many pass by, all lit up with neon lights as the sun sets.

Today of the first day of Chinese Independence day and ALL of China is on vacation for the next week!! 1.3 billion people (1/4 of the human population on earth) all have their vacations this week and they go and visit sites of China too!! OMG…we really felt a difference while touring The City of Ghosts, climbing 350 stairs straight up a mountain as if we’re rush hour traffic. Thank goodness we’re on a boat for the next three days. The ancient Chinese believe that when you die, your spirit goes to this place to say goodbye to their relatives, and spirits are judged to be good or evil, going either to a better life or to the torturous after life.